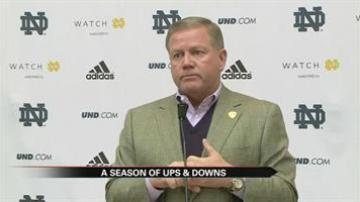 NOTRE DAME, Ind. -- Two of the most prestigious academic institutions in the country will go head to head in football this Saturday for the final game of the regular season. Notre Dame Head Coach Brian Kelly spoke Tuesday about this season's ups and downs.

Despite multiple season-ending injuries including Louis Nix and starting center Nick Martin, the Irish have won 8 of their 11 games.

This weekend they could face the toughest team they've faced all season.

This season has been a stark contrast from last season with multiple injuries and controversial calls.

Just a few weeks ago, when it seemed as if the stars were going to align and the Irish were likely headed to a BCS Bowl game, a tough loss to the Pitt Panthers turned things upside down.

"Our football team has shown over the last three or four years that we don't play that way, and so for me that was an anomaly," said Coach Kelly.

After last week's win over BYU, it looks like the Irish have gotten their swagger back.

"We don't play the game the way we need to play it each and every week, everybody, every player, and we're getting there and our guys are understanding it," said Kelly.

Although their BCS hopes were crushed, they're hungry to finish out the season with a victory.

"One turnover or less. That's got to happen," said Kelly.

The Irish had big success in their run game last week tallying a total of 235 yards-with Cam McDaniel rushing for a career high 117 yards.

They are looking to tap into that this Saturday against a Stanford defense that-on average- allows just 19 points per game.

"There's got to be an effective running game as part of it," said Kelly.

Notre Dame's defense allowed 415 yards in total offense and just 13 points against BYU. Kelly says it's crucial the Irish do this again Saturday, especially after Stanford racked up more than 600 yards over Cal last week.

"If we eliminate big-play touchdowns and keep the points down, and our margin of keeping points down is keeping it in the teens, then we've got a great chance of winning," said Kelly.