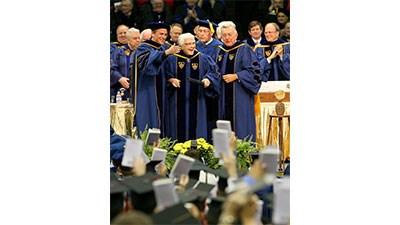 University of Notre Dame President Rev. John I Jenkins, CSC issued a statement after learning of the death of Harper Lee.

Lee was awarded an honorary doctor of humane letters degree in 2006 during the university's 161st commencement ceremony.

“When Harper Lee received her honorary degree at Notre Dame in 2006, 2,800 graduates stood with paperbacks of ‘To Kill a Mockingbird’ in their hands – a fitting tribute to the woman who helped shape both their social consciousness and love of literature,” President Jenkins said in a press release.

The citation honoring Lee reads in part: “Her Pulitzer-Prize-winning novel ‘To Kill a Mockingbird’ is a testament to the power of one person – even one who happens to be small – that introduced us to some of the most poignant, and most human, characters in contemporary fiction. They, and she, taught us that we are more alike than different; that, in the words of her heroine, young Scout, ‘There’s just one kind of folks. Folks.'"

In February 2006, Lee sent a letter to Father Jenkins accepting the invitation for the honorary degree.

She wrote, “Never in my days did I imagine that I would receive such recognition; Notre Dame is the symbol of all that is of good report in American education. To be honored by an institution for which I have such respect makes me feel humble indeed, and enormously proud … If you look out your window on a clear night, you may see an old lady jumping over the moon.”