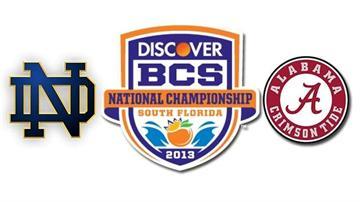 After an undefeated year, Notre Dame's Fighting Irish lost the BCS National Championship to Alabama with a score of 42-14.

The championship game started at 8:30 p.m. in Miami Gardens. More than 80,000 people attended the game, an attendance record for the Sun Life Stadium.

During the first quarter, Alabama scored on its first three possessions and by the end of the first half, Alabama was leading 28-0.

The Crimson Tide continued to dominate the second half of the game, leading 35-0 in the third quarter.

Notre Dame's Everett Golson scored a touchdown to put the Fighting Irish on the board in the third quarter.

The score was 35-7 heading into the fourth quarter.

During the fourth quarter, Alabama scored again to make the score 42-7.

Later in the fourth quarter, Golson threw the ball to Theo Riddick in the end zone for a touchdown. Then they scored a field goal to make the score 42-14.

The Crimson Tide were the defending National Champions and have been to the BCS championship game in three of the last four years. They won all three games.