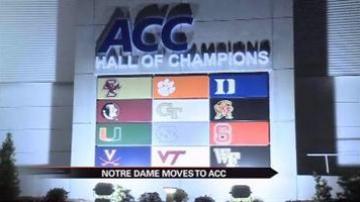 NOTRE DAME, Ind.-- Notre Dame made a very historical move on Wednesday. After more than 15 years in the Big East conference, the University announced that it will join the Atlantic Coast Conference.

Students had mixed emotions on Wednesday morning following the University's announcement. While many students are excited about the prospect of stronger competition in basketball and other sports, there's a few hangups about football.

"I think we're going to get better games out of this and I Think it matches up well academically," said one Notre Dame student. "But, I don't like that we have to play five ACC games in football now. I like having our autonomy."

The ACC is one of the top academic and athletic conferences in the country-- top in every sport but football, that is.

"Hopefully, it's not going to be all pushover games or games where they're not competitive. So, hopefully, the ACC will be a good fit for the school. So I'm looking forward to it," said a Notre Dame freshman.

Notre Dame was able to keep it's independence for football, maintaining their broadcast rights and a bit of flexibility in the schedule.

But the Irish are required to play five ACC opponents each year and Notre Dame will be a part of the ACC's non-BCS bowl package. That means that the Irish could take the place of an ACC school in an non-BCS bowl game.

"There is a possibility of a Notre Dame-ACC Orange Bowl. Below the BCS, Notre Dame will be a part of the ACC bowl lineup," said the commissioner of the ACC, John Swofford.

And fans are still faithful, as long as some of the tradition remains.

"I mean it gives us freedom to still have our classic rivalries and stuff like that while still playing in a good conference," said a Notre Dame sophomore.

"As long as I get to see my Notre Dame football, I'm fine," added a freshman.

Notre Dame Athletic Director, Jack Swarbrick said the Irish hope to join the ACC during the 2015-2016 season but the university is in talks with the Big East about accelerating the process.