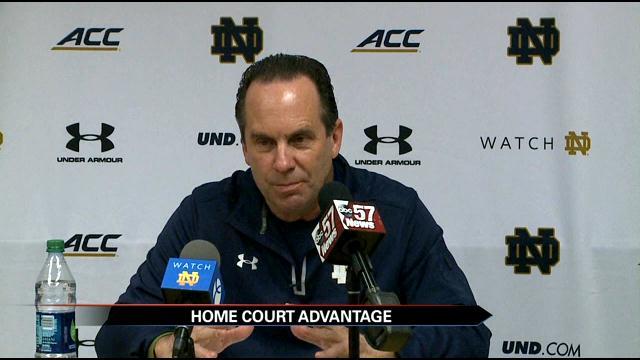 Wednesday night, in a clash between the Atlantic Coast and Big Ten conferences, the Notre Dame men's basketball team will face off with the Michigan State Spartans at Purcell Pavilion.

It's a new team and a new season, and the Irish men's basketball team is on a roll.

“Certainly they have a little chip on their shoulder after last year and that's been a good thing,” Irish head coach Mike Brey said Monday.

The Irish are in recovery from last year's disappointing 15-17 season, this week coming off of a 90-42 win over Chicago State, and preparing for one of their biggest challenges yet in 5-2 Michigan State.

“This would be so good for this group early in the season to feel like they have accomplished something against a really good program and team,” Brey said.

The Spartans average 17 assists and 73 points per game.

“Wednesday is a heck of a test to guard a really explosive offensive team, so I think that's a great test for where we are defensively,” Brey said.

Notre Dame has totaled 61 steals so far this season and ranks third in the ACC in scoring defense, giving up just 53 points a game.

“Transition D and then guarding the arc, I think are the two big defensive keys for us on Wednesday,” Brey said.

And the Irish are preparing beyond the x's and o's this week.

“It's going to be loud in segments of practice the next two days just to kind of simulate it,” Brey said.

Brey says a win against a team like Michigan State could help Notre Dame's success in the long-run.

“For us to be back in the mix for post-season, you've got to go back to what doing what you've done here at home,” Brey said.

The Irish are 6-1 overall on the season, suffering just one loss to Providence.

Tip-off is set for 7:15 p.m. at Purcell Pavilion Wednesday.