Notre Dame must get by "Donald Devastation" 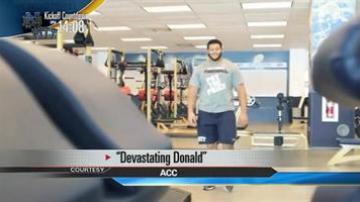 PITTSBURGH, Pa. -- The Fighting Irish are trying to prove last year's win against Pitt wasn't just a fluke. To do that, they'll have to get past one Panther player who is considered the best defensive tackle in the country.

Donald, who is from Pittsburgh, is a dominating force for the Panthers.

He leads the nation in tackles and averages one sack a game. He is ranked third in the nation.

Coach Kelly said "Donald Devestation" is very active in the backfield and the Irish will need a specific game plan to stop his attack.