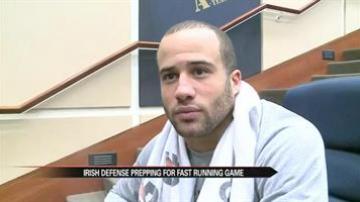 SOUTH BEND, Ind. -- It's fall break for students at Notre Dame but that doesn't mean a break from football for the Fighting Irish. ABC57 spoke with players Wednesday about preparing for the Air Force Academy Falcons this weekend.

This week could be yet another test for the Irish defense facing off against a triple option offense-something they haven't done yet this season.

"I feel like triple offense is something that's really taxing on the defense," said Bennett Jackson, Irish cornerback.

Air Force's triple option is more disciplined and run-based allowing the offense to move the ball faster on the ground.

This style of offense allows Air Force to compensate for a lack of size and speed in its linemen.

"A star player is not supposed to come out of this defense right now. Right now, it's about assignment because if one person doesn't do their assignment, they could bust a long one on us," said Stephon Tuitt. Irish defensive lineman.

Although the triple option is not something the falcons have necessarily been successful at with a 1 - 6 record on the season, the Irish are not underestimating this week's opponent.

"They could push the ball all the way down the field a majority of the time, or they have the opportunity to, probably going for it a lot of times on fourth down," said Jackson.

The Irish say at the end of the day it all comes down to doing what they do best-playing the game of football.

"You have to play with your hands. Air Force is another team we're going against. They just have a different style of play. We just have to do our fundamentals just like everybody else," said Tuitt.

Air Force is one of two option teams Notre Dame will go up against back to back. Navy, also an option team, is up next week.