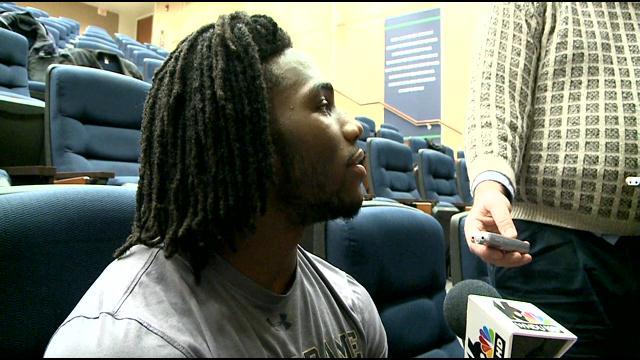 This week is the final week of the regular season in college football, and to wrap things up, the Fighting Irish will head to Southern California to take on the USC Trojans.

“We're focusing on execution, it all comes down to execution, and executing plays as called,” Irish running back Tarean Folston said Wednesday.

There's a lot on the line this week for the Irish.

“Definitely need to get this win to go into the bowl season with some extra confidence,” Irish wide receiver Corey Robinson said.

As they look to recover from a heartbreaking loss to Louisville and stay resilient despite multiple injuries.

“For us to lose it really hurts, so we're going to use that as motivation going into this week and we hope to get a win. We have a lot of young guys playing for their first time, a lot of guys that weren't even expected to play this year had to step in and play huge roles for us on defense, so we're going to make a lot of mistakes and give up some points,” Irish defensive lineman Justin Utupo said.

And the Blue and Gold say they are relying on Head Coach Brian Kelly's "next man in" philosophy to shut down USC.

“It's the next man in mentality and its unfortunately played a larger role in our season this year, but coach really relies on that and we have a bunch of great athletes on this team so coming in and doing your job is really what we're looking for,” Irish linebacker James Onwualu said.

The Irish beat the Trojans by less than a touchdown last year at Notre Dame Stadium. Two years ago Notre Dame beat USC in Los Angeles, a win that sent them to the national championship.