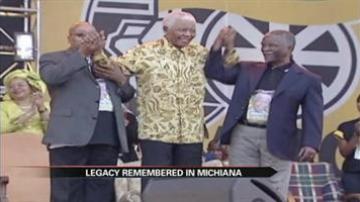 SOUTH BEND, IN -- The impact of Nelson Mandela's loss is being felt right here in Michiana.  An African peace professor at Notre Dame says we can all learn a little something from the way that Mandela lived.

Emmanuel Katongole is a professor of peace studies at Notre Dame. He says he sees a lot of connections between his teachings and the legacy of Nelson Mandela.

"He speaks volumes about the journey to peace and what it looks like," Katongole says. "It's a long road to freedom."

Katongole's coworker, Father Oliver Williams, worked with Mandela about 20 years ago. He says while meeting Mandela, he learned a lot about forgiveness.

"We were shocked that he could speak so pleasantly about the men that kept him in jail for 27 years," says Williams.

Mandela's legacy of forgiveness and peace is how Michiana leaders will remember him.

Notre Dame has been hosting a series of events celebrating the life and work of Nelson Mandela. They plan to adjust the remaining events to also reflect his death.