Notre Dame QB, who oh who will it be? 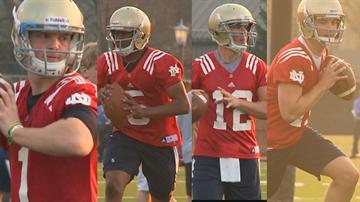 NOTRE DAME, Ind. – Well let the speculation begin. The Fighting Irish had their first spring practice on Wednesday. There are still plenty of open starting positions up for grabs this season including quarterback and wide receiver.

Head Coach Brian Kelly said he wants it to be an even playing field for his guys who are competing for the jobs.

This is Kelly’s third year as head coach, and third straight spring to host, what has turned into the annual quarterback competition.

Last year’s starter Tommy Rees is back for another year of throwing his helmet into the competition.

Junior Andrew Hendrix also played last season, and is in the mix again.

Then there are the two younger guys who also want the job.

Sophomore Everett Golson kept a year of eligibility last year, and on Wednesday Kelly said he’s got what it takes.

"He’s got quick feet. He’s got a strong arm. He’s got all the tools," said Kelly. "Now for me it’s about accuracy, getting the ball out on time, and obviously having good football intelligence."

Kiel enrolled in January at the university, and Kelly said he’s got one up on the others, literally.

"He has something that the other three quarterbacks don’t have, that’s 6' 4''. When you got that size it allows you to see some things," said Kelly.

The head coach said right now Kiel’s focus is on learning the language, which Kelly admits can be frustrating for the QB.

"For him it’s just understanding the language, right now. That’s a bit overwhelming for him," said Kelly.

The veterans on the team said the transition into college can affect everyone differently, but you still end up playing the same game.

"Gunner looks like he’s picking up well," said inside linebacker Manti Te’o. "It’s always a confidence issue. You come to college and people are bigger, faster, stronger, but at the end of the day its still football and once they understand they’ll be fine."

The team seems to be transitioning into spring practices just fine, even without a designated quarterback.

In fact, some said it’s actually helping their position.

"It’s kind of good for receivers because you get a lot of different balls thrown to you and you have to make a play no matter what," said wide receiver John Goodman.

At the end of the day the Irish are just happy to be back to work as they prepare for the upcoming season.

"It felt really good just to see the younger guys, and the older guys all excited again, nice weather in South Bend at this time, that we rarely get, so it’s very exciting," said running back Theo Riddick.

At this time there doesn’t seem to be a deadline on when the Irish will officially hire their new quarterback.

For more information you can visit the following website.