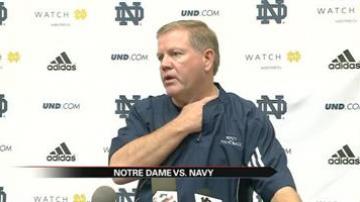 SOUTH BEND, Ind. -- In less than 24 hours, the Fighting Irish will face off with Navy's Midshipmen for a tradition that runs 87-years. The school held a pep rally at the Compton Ice Arena Friday evening.

The Navy is coming off a big win over Pitt last weekend.

"All of the guys are working hard and we're getting into a little bit of a groove offensively. Everyone's understanding what we're trying to do so we feel as confident as we have I think all year," said Tommy Rees, Irish quarterback.

"They're much improved defensively over last year in terms of personnel and the way they're playing so we had to have a good week at practice and I liked the way we prepared, now we've got to play," said Head Coach Brian Kelly.

"Things that we've done the last few games we're going to have to continue to do them on offense and that is score points," said Kelly.

"The quarterback is really the guy that makes it happen, so those were the focus pieces of the last practice," said Kelly.