Notre Dame remains focused in practice as they prep for Louisville 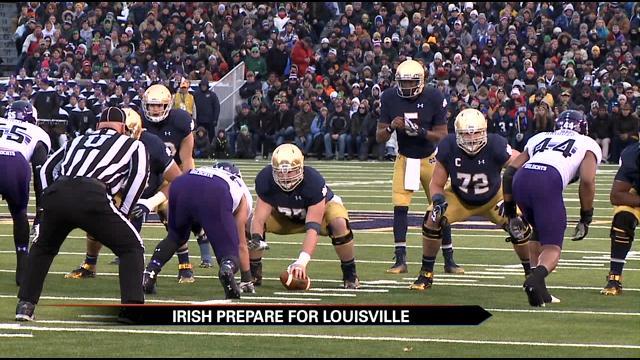 The Fighting Irish are gearing up this week for their final home game of the season against the 24th-ranked Louisville Cardinals.

Head Coach Brian Kelly says the team is focused on preparation, as it has all season, and the mood this week hasn't been any different than any other week, and Kelly says now the team has to make sure that preparation translates into how they play this Saturday.

“Obviously they want to win, but no letup in terms of work ethic and their want and desire to win,” Kelly said.

“Their practice was what I would have expected if we were undefeated at this point,” Kelly said.

But recently, that practice hasn't translated into game situations as Kelly had hoped.

“They know they have to play better, so there hasn't been any letup on their part in the terms of the way they've prepared and they've practiced,” Kelly said.

In order to be sure that preparation pays off against 7-3 Louisville, the Irish will have to slow down the Cardinals run game, which averages 148 yards a game.

“I think we have to eliminate big plays, defensively. We can't give them big play runs and passes,” Kelly said.

As well as limit a problem that's plagued Notre Dame for a few weeks now, turnovers.

“I think offensively we have to run the offense that we've run without the mistakes that we've made in terms of turning the football over. If that's the case we think we can score enough points to win the football game,” Kelly said.

Louisville is 27-1 under Head Coach Bobby Petrino when winning the turnover battle, that one loss was suffered this season against Florida State when they turned the ball over twice, and force three turnovers from the Seminoles.