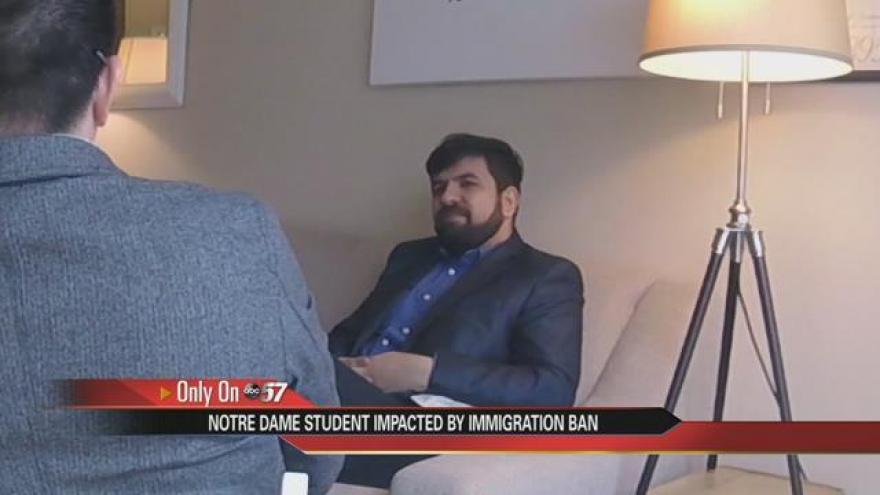 Four days after President Trump signed an Executive Order banning entry for nationals from seven different nations; those affected in Michiana are speaking out.

Iran, home to over 80 million people, is one of those seven nations.

On Monday, one student from that country, who now calls the United States home, is hoping to make a difference in this community.

Arman Mirhashemi is a PhD Candidate at the University of Notre Dame.

“I think for president trump as I know he’s sitting in the presidency chair of one of the most greatest countries in the world, I’m going to say to him what George Washington said once, years ago. And he said observe good faith and justice toward all countries. Cultivate peace toward all. That’s what I want to tell him,” said Mirhashemi.

Mirhashemi, reciting the words of our nation’s first President, in response to the recent actions of our 45th.

“We are on student visa and this E.O. is actually banning people like us coming to this country. So that’s one part of the fear. The other part is that what is going to happen to us that are now, some of us are on this visa in this country,” said Mirhashemi.

Mirhashemi is studying Aerospace Engineering and has been in the United States as a permanent resident for more than five years.

Monday he was appreciative of those Americans fighting for his rights.

“I did not expect this, this quick and this intense. Everybody did what they could do. For me, I have a political background and activities, and human right activates. And you know, after all these years, it again showed me the power of people,” said Mirhashemi.

Notre Dame Professor of Finance and Economic Jeff Bergstrand says while he doesn’t see war as an ultimate consequence of these initial Executive Orders, he does say such a drastic change in policy in such a short amount of time, can have an unforeseen and lasting negative impact on Americans.

“What it reflects is trying to implement a policy that is very important, has enormous implications, and doing it way too quickly,“ said Bergstrand.

Bergstrand says it was Notre Dames moral obligation to stand with those who don’t have voices or are being oppressed in society.

“Being at a Catholic university as I have for thirty years, it is so important to me that we embrace the notion of economic justice, humanity and concern for the poorest in society,” said Bergstrand.

In a letter to the university sent Monday morning, Mirhashemi, thanked Father John Jenkins for upholding the teachings of Father Hesburgh and urged the univeristy to continue its fight against injustice and protect their students.

Even though Mirhashemi faces uncertainty in the coming days and months, he says fear has no place in this country’s past, present or future.

“I think that people came together in the United States to stand up for us that bring hope to my heart. And that touches my heart so deeply. And I think it makes me believe again in what Martin Luther King said: that hate cannot drive hate out. Only love can do that,” Mirhashemi.