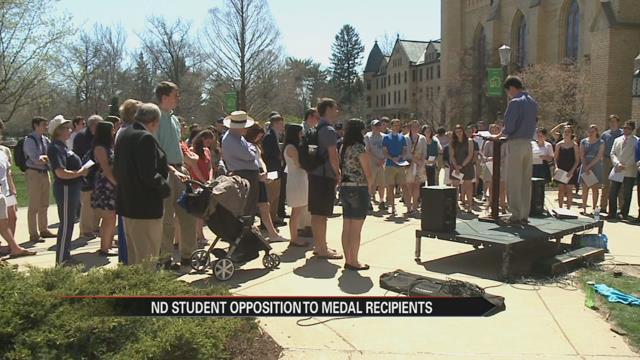 Dozens of demonstrators gathered on Notre Dame’s campus Sunday afternoon to express their disagreement with the school’s nominees for the Laetare Medal.

“These two men are not living up to their calling as members of the church in public office, which the Laetare Medal serves to honor,” Notre Dame senior Hailey Vrdolyak said.

Vrdolyak was one of the students who planned a pro-life prayer service in response to her school’s nominating Vice President Joe Biden and former House Speaker John Boehner for its nationally-recognized Catholic honor, the Laetare Medal.

“We’re just responding to the idea that Notre Dame could be giving scandal in giving this award and confusing people about what the church stands for,” Notre Dame senior Alexandra DeSanctis said. “So we’re very much with the bishop on this and he definitely supports what we’re doing.”

Seven student groups organized the event, and those taking part in Sunday’s service agree with Fort Wayne-South Bend area Bishop Kevin Rhoades, who released a statement about the award nominees.

“I realize that Notre Dame is trying to separate or distinguish the conferral of the Laetare Medal upon the recipients from their positions on public policies,” the statement reads. “I do not think this is realistically possible or intellectually coherent.”

The medal is a prominent honor awarded at commencement to an American Catholic who illustrates the ideals of the church.

“The graduation ceremony is supposed to be about the students and I feel like this brought in unnecessary controversy,” Notre Dame senior Tim Bradley said.

The controversy centers on Vice President Biden’s support of abortion and same-sex marriage and Speaker Boehner’s support of the death penalty.

“The award is specifically given to American Catholics for their service to the church and public life,” Vrdolyak said. “And I don’t think these two have served the church in their public life, especially Joe Biden, who often tries to divorce his faith from his political policy standings.”

“In recognizing both men, Notre Dame is not endorsing the policy positions of either, but celebrating two lives dedicated to keeping our democratic institutions working for the common good,” the statement reads.

But students at Sunday’s service reject that idea.

The service wrapped up with a procession to the grotto on campus, where participants laid down flowers.

There are at least two petitions circulating about this controversy that have collected more than 3,000 signatures thus far.

Students at Sunday’s service said they’ve made two attempts to meet with school officials to discuss the matter, but were rejected both times.