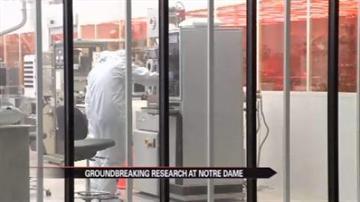 SOUTH BEND, Ind. -- When it comes to nano technology, few places in the country are leading the way like the University of Notre Dame. The university has teamed up with Indiana University to study hydrogen sulfide and how it could have health benefits for people suffering from common diseases.

In the last 5 years, hydrogen sulfide has been shown to be potentially involved in ways to treat diseases such as heart disease, diabetes, strokes, and even cancer.

"Hydrogen Sulfide is probably the first molecule that was involved in the origin of life. We're only now realizing that this gas that we thought was poisonous is actually very beneficial,” said Dr. Ken Olson, Physiologist, IU School of Medicine.

But there's a problem. Researchers have been unable to pinpoint how it works.

"There's been over 1,000 papers published last year on Hydrogen Sulfide and its potential medical implications but nobody has been able to measure it inside a cell,” said Olson.

But a collaborative research team from the University of Notre Dame and Indiana University Medical School is getting closer by using nano probe technology.

"We can deliver things to cells that we could never get inside cells before,” said Olson.

Dr Scott Howard and his team of electrical engineers have created a microscope that uses a laser and nano probes to create an image of a cell from the inside.

In this model, the team is tracking the concentration of oxygen and hydrogen sulfide.

The brighter the dot the less gas is present.

The research illustrates how powerful nano technology can be in advancing medical breakthroughs.

"The impacts on society are going to be enormous," said Dr. Kathleen Eggleson, research scientist at the University of Notre Dame.

But even with all of the excitement over the benifits nano technology brings to the table for the medical field, and many others, some still have concerns about the technology, and how it is developed.

An example of this is nano particles slipping throgh the blood brain barrier.

The blood brain barrier is what keeps most toxins and other harmful things in our blood from getting into our brain.

It acts like a special screen door that only certain things can pass through, like oxygen (beneficial) and lead (detrimental).

Researchers have found that certain nano particles are becoming coated with a special protien in our blood that unlocks the doorway that is the blood brain barrier, and can carry a payload through it into the brain.

The ability to bypass the blood brain barrier has thwarted medical advancement for decades, and now, researchers have the key to solving the problem; but so do those who would use it against us.

Concerns that someone could weaponize a disease and use these nano particles as a delivery system have been raised; and because nano particles can be released easily in an aresol form, some wonder if we have already opened Pandora's Box.

"It is concerning because like any potent technology if it is nefariously misused it can cause harm," said Eggleson.

That is why she insists that just and sensible governance, including appropriate regulations and international standards, need to be in place in order for the development of nanotechnology to be responsible.

In order to achieve that, Dr. Eggleson is leading the way by working along side researchers at Notre Dame to develop international standards so we can all benefit from the breakthroughs they are making.