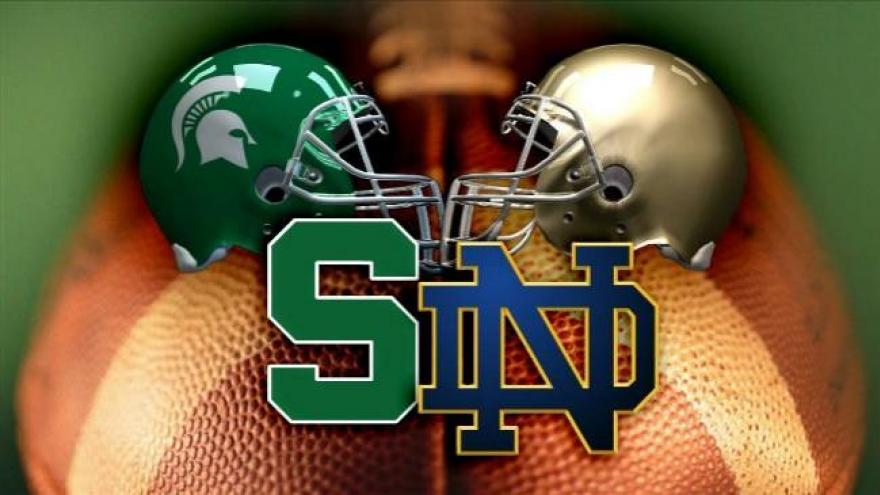 The Notre Dame Fighting Irish were back on the field taking on the Michigan State Spartans at Notre Dame Stadium Saturday.

Torii Hunter Jr. is to play in the game, coming off a concussion while playing against Texas in the first game of the season.

Michigan State won the coin toss and chose to defer. Notre Dame would have their chance with the ball first.

What would have been a touchdown for the Irish, was called back for an illegal block in the back with 3:14 to go in the first quarter.

Even with the set back, it was a repeat third down and DeShone Kizer ran the ball in for an Irish touchdown. With the extra point, Notre Dame was first on the board leading the Spartans 7-0.

The score held at 7-0 Notre Dame at the end of the first quarter.

At the beginning of the second quarter,  Michigan State’s Tyler O’Connor threw a long ball that wound up in the hands of Notre Dame’s Devin Studstill.

With about 12 minutes to go in the second quarter, the Spartans recovered a fumble after a kick.

On the next play, Donnie Corely caught a pass from O’Connor and ran the ball 38 yards for a touchdown.

The Irish had possession with 9:19 to go in the second quarter and C.J. Sanders fumbled the ball which the Spartans recovered.

Close to the end of the half with 23 seconds left, Michigan State's R.J. Shelton ran the ball in for his fifth career touch down. Spartans with a 15-7 lead over Notre Dame after the extra point.

The Irish tried the Hail Mary pass, but came up short with one second to go in the half.

Michigan State 15, Notre Dame 7 as the game went into halftime.

Michigan State started with the ball at the beginning of the third quarter and ran out of plays, only to punt to Notre Dame.

On the play, unsportsman like conduct was called on ND’s Nicco Fertitta as he stood over a MSU player.  This put Notre Dame back an extra 15 yards.

At 12:41, a lengthy 9 play drive led to a Spartan touchdown as Corey Holmes ran the ball into the endzone. MSU 22, ND 7 after the extra point.

With 7:48 left in the third, Kizer threw a costly interception that ultimately led to another Michigan State touchdown within the next 30 seconds of the game. MSU with a hefty 29-7 lead over the Irish.

Just one possession later, MSU's Holmes breaks away from the defense and took the ball a staggering 73 yards for another Spartan touchdown, putting MSU up 36-7 with the extra point.

The Irish would attempt to reel in the Spartans with a touchdown to lessen the difference 36-14 with 3:45 left to go in the third quarter.

The score is maintained at MSU 36, ND 14 heading into the fourth quarter.

The Fighting Irish would tighten up the gap in the third quarter.

Two back-to-back touchdowns for the Irish would put them closer to MSU, 36-28.

However, the fourth quarter scores would not be enough. Notre Dame loses at home to the Michigan State Spartans 36-28.

The Irish will play their next game at Notre Dame Stadium against Duke Saturday, September 24 at 3:30 p.m.