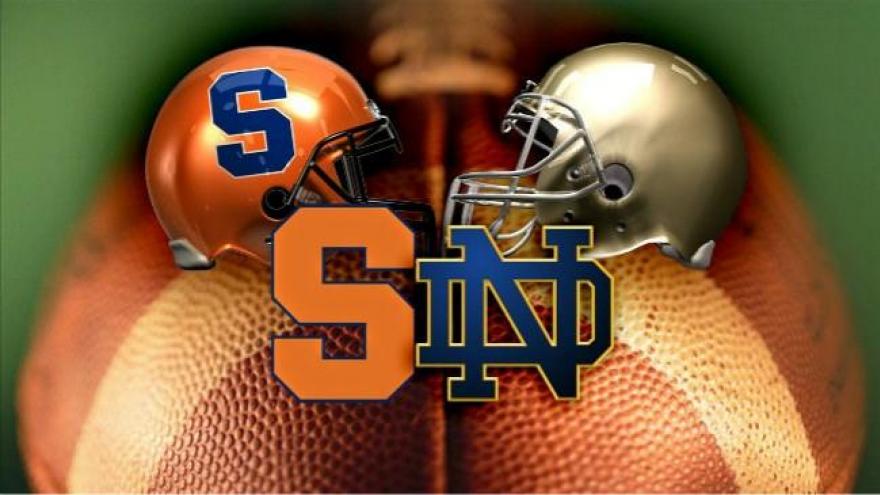 The Notre Dame fighting Irish took on the Syracuse Orange at Metlife Stadium in East Rutherford, New Jersey on Saturday.

The Irish came into the game looking to improve their 1-3 record after the firing of Irish defensive coordinator, Brian VanGorder.

With 12:36 to go, Syracuse quarterback Eric Dungey ran the ball three yards for a touchdown. The extra point would be blocked and landed in the hands of ND’s Cole Luck to give the Irish two extra points. Notre Dame leading the Orange 9-7.

On the next Irish drive, Kizer found St. Brown again for a 67-yard touchdown. Justin Yoon kicked the extra point and ND pulled away from Syracuse 16-6 with 11:23 to go in the first quarter.

The Orange were looking to catch up as Dungey would connect with a receiver, scoring a touchdown with a good extra kick. Syracuse would trail the Irish 16-13.

With just over ten minutes to go in the first, ND’s C.J. Sanders would return a kick from Syracuse 93 yards for a touchdown. Notre Dame would take a ten-point lead heading into the second quarter. Notre Dame 23, Syracuse 13.

At the start of the second quarter, Syracuse would make it to the endzone only to have the call reversed. It would be third down at the one-foot line.

The Orange were stopped by the Irish on third down, but they would go for it on fourth down as Dungey used the quarterback sneak for a touchdown with 13:22 left to go in the half. This raised the score to Notre dame 23, Syracuse 20.

With 12:45 left in the half, Kizer completed a long pass to ND receiver, Josh Adams. This allowed Kizer to walk the ball in for an Irish touchdown on the next play. The extra kick was good. Notre Dame 30, Syracuse 23.

Chase Claypool would keep a kick from the Orange out of the endzone – causing Syracuse to start the drive at their own 1-yard line with 9:12 to go in the half.

A few possessions later, the Irish would be forced to settle for a field goal kick giving ND a 13-point lead. Notre Dame lead Syracuse 33-20.

Closing in on the end of the half, Kizer took an 11-yard loss after being sacked by Orange defenders.

Keeping the Orange momentum going, Syracuse’s Brisly Estime returned a kick 75 yards to the ND 14-yard line. This would set up a pass to Ervin Phillips who scored the touchdown. Syracuse still trailing 33-27 with 30 seconds to go.

With a mere 16 seconds left in the half, Kizer passed the ball down the field into the hands of a Syracuse defender.

Syracuse would attempt a field goal before the half, but the kick would not be good.

Notre Dame 33, Syracuse 27 as the teams head into halftime.

With 9:48 to go in the third quarter, Notre Dame would score two back to back touchdowns.

ND's Kevin Stepherson would catch a pass from Kizer and put the score up 40-27 after the extra point.

On the very next possession, Dexter Williams would take the ball 59 yards to the endzone for another Irish touchdown. The Fighting Irish pull away from the Orange with a 20-point lead. Notre Dame 47, Syracuse 27.

The score would stay at 47-27 heading into the fourth quarter.

With 11:14 to go in the game, Notre Dame kicks a field goal that would tack another three points on the board that would put the Irish up 50-27 over the Orange.

On Syracuse's following possession, Dungey would run five yards to score a touchdown and attempt a two-point conversion that failed. Notre Dame still holds the lead, 50-33.

Notre Dame would take "W" back to South Bend as the Irish beat the Syracuse Orange at Metlife Stadium 50-33.