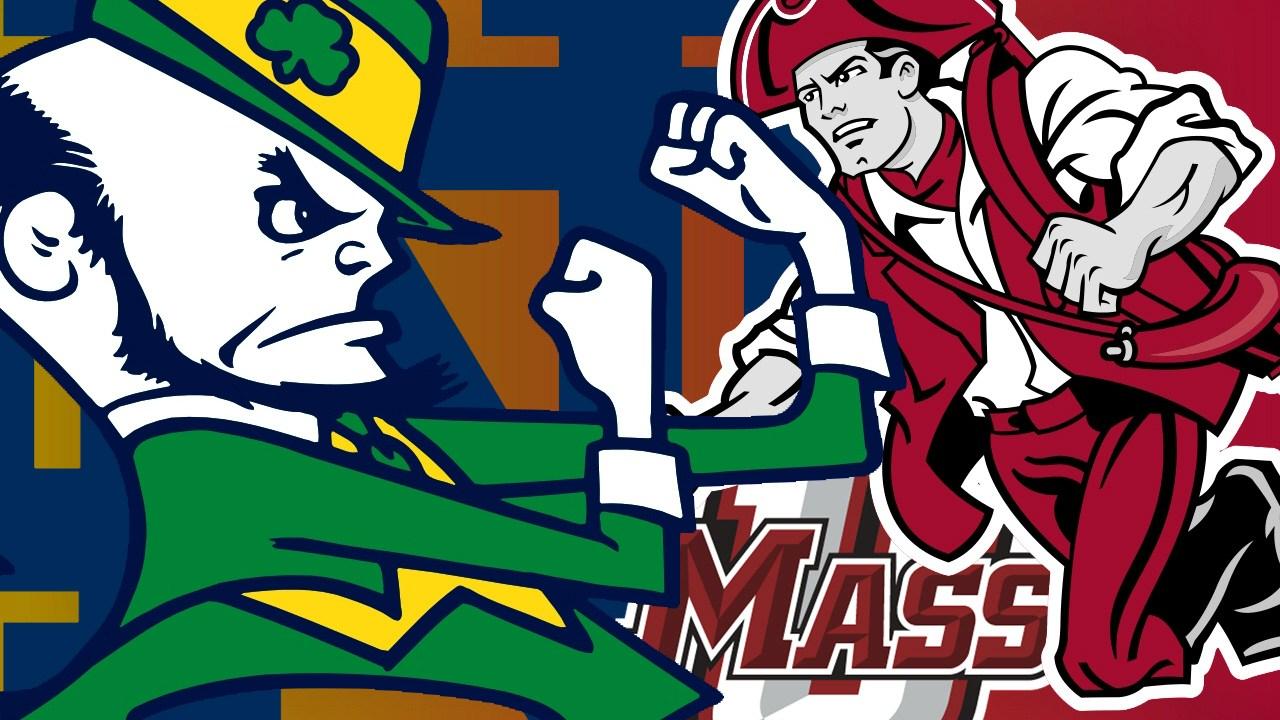 After their victory over Georgia Tech last week, NO. 6 Notre Dame hosts UMass in South Bend. The Irish are 3-0 in week 4 of college football.

UMass would receive the ball this week after winning the coin toss before kickoff.

The Irish score the first touchdown of the game putting 7 points on the board with just 6:02 left in the first quarter. C.J. Prosise took this one in all by himself for 57 yards.

A second touchdown would come from Notre Dame, this time by Quarterback DeShone Kizer who would run it from 8 yards out for 14-0 in the first quarter.

But within seconds, Marquis Young of UMass would score with 83 yards for the touchdown with just a few seconds left in the first quarter. The extra point is blocked by the Irish.

The first turnover of the game would go to the Irish after Kizer's pass to Fuller is deflected from his hands giving UMass the ball.

Now a 1 point game, UMass scores a second touchdown from one yard out leaving the score at 14-13 Notre Dame, with 11:17 remaining in the first half of this game.

Another touchdown from Notre Dame wasn’t far behind. Kizer finds Fuller in the end zone for the throw putting the Irish in the lead 21-13 with 7:47 left in the second quarter.

3 plays and 75 yards, now a rushing Touchdown for UMass from Jamal Wilson. They would trail Notre Dame by only one point with the score at 21-20 with 6:44 left in the first half.

Notre Dame would answer with a touchdown soon after. C.J. Sanders with the punt return, 50 yards for the score. The Irish lead 28-20 with 3:21 remaining in the first half.

The minutemen were already near midfield until a big sack by Sheldon Day would end the drive. The third and 10 would become fourth and 23.

With 30 seconds and two timeouts remaining, the Irish are down to the 25 yard line and score another touchdown when Kizer throws to Chris Brown in the end zone.

Coming back from halftime, Notre Dame's Prosise would score for a 16-yard touchdown. The Irish lead 42-20 over UMass.

UMass attempts to fake the punt but fails and Notre Dame would take over at the UMass 30 yard line.

This would lead to the Irish scoring another touchdown from 14 yards out. The Irish would put the score up 48-20 with 9:28 left in the 3rd quarter.

Brandon Wimbush would come in at quarterback for the Irish and immediately hand off a 50 yard pass to Fuller. Down at the 5 yard line but after being under review, officials ruled it as an incomplete pass because the ball briefly touched the ground.

Another touchdown by Notre Dame, this time Brandon Wimbush answering with 58 yards for the touchdown and Notre Dame with the extra point.

Notre Dame takes advantage of their first interception of the year when Mathias Farley tips the ball for Cole Luke to come down with it. End of the third quarter the score remains the same, 55-20 Notre Dame.

UMass drops the ball on fourth down and Notre Dame would take over.

A 70-yard touchdown from Notre Dame's Josh Adams would help the Irish lead UMass 62 to 20, 8:30 left in the fourth quarter.

Massachusetts would score another touchdown with just 3:35 left in the game. Shakur Nesmith took this one into the end zone but the Irish would still lead 62-27.