By: Allissa Corak
NOTRE DAME, Ind. -- The Notre Dame Fighting Irish would take on their most sought after rivals, the University of Southern California Trojans at Notre Dame Stadium Saturday night.

USC, the 11th ranked team, and Notre Dame ranked 13th, came into the 89th match up with one loss each.

The Trojans would have a rough start to this one. On their first offensive play, quarterback Sam Darnold lost control of the snap and fumbled. Notre Dame Linebacker Te'von Coney would come up with the ball and the Fighting Irish took over midfield. 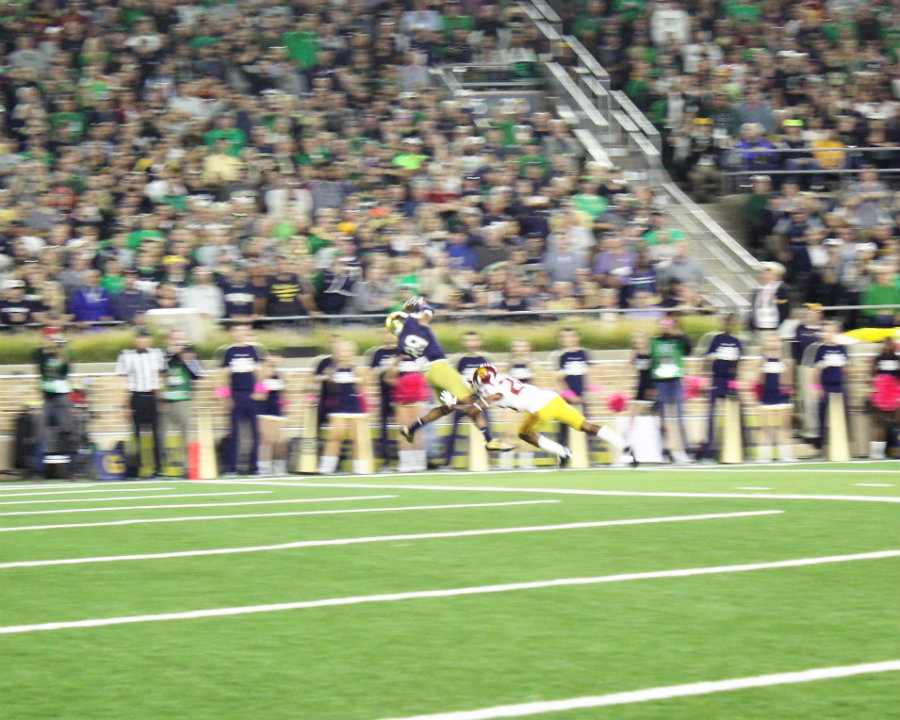 Kevin Stepherson catching a pass for a TD. 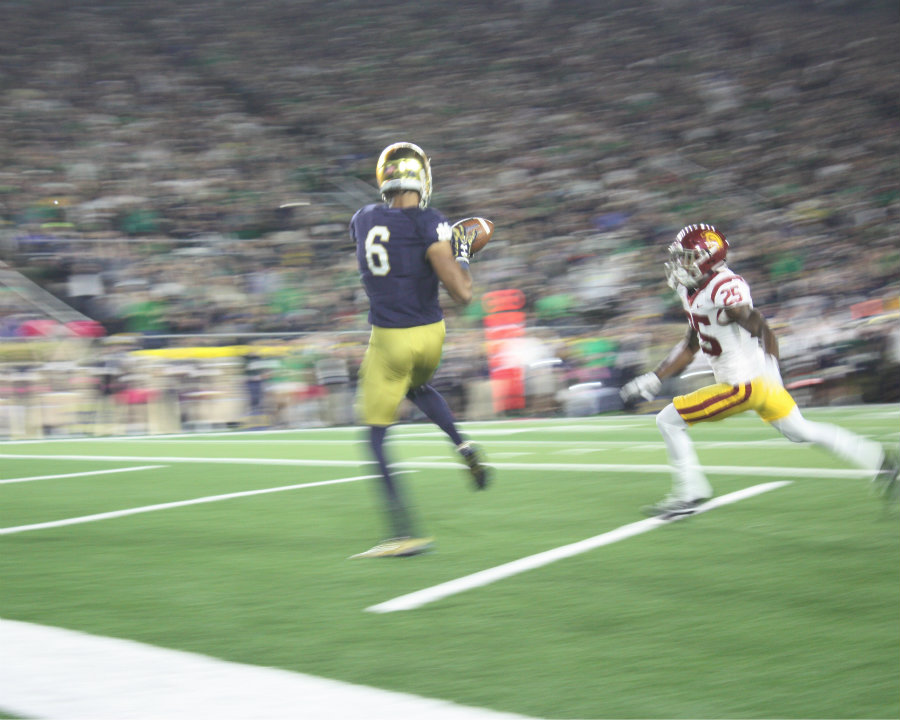 St. Brown catches a pass for the first TD of the game.

And, boy, would that turnover turn out well for the Irish. A few plays later Irish QB Brandon Wimbush found his man Equanimeous St. Brown in the endzone for a touchdown. After the kick, ND would go up 7-0 over the Trojans.

The Irish weren't going to go easy either. With just over 7:00 to go in the first quarter, a drive downfield sets up Wimbush to connect with Irish receiver Kevin Stepherson for another TD. Justin Yoon's kick is good and ND has a 2-score lead. ND 14, USC 0.

It was a messy start to the second quarter. The Trojans would be within scoring range when Darnold was sacked for a loss of 10 yards. On what would be 4th and 14 for USC, a holding call on ND's defense would put the Trojans halfway to the goal line on a first down.

After being stopped by the defense, USC would go for three but kicker Chase McGrath missed the uprights wide.

On Notre Dame's ensuing possession, Wimbush would show off his athleticism before being forced into a 4th down. The Irish would punt the ball but USC's receiver missed the catch and fumbled. ND's Drue Tranquil recovered the ball and the Irish would take over at the USC 9-yard line.

That turnover would once again bode well for the Irish as Josh Adams would plow his way through a Trojan defense for another Notre Dame touchdown. Irish showing they're in control with a lead of 21-0 with just under 8:00 to go in the half.

USC just could not catch a break with the Irish defense. After two impressive plays by the Trojans, Darnold is picked off by ND's Nick Watkins. The Irish take control at the ND 41-yard-line.

The Fighting Irish would cash in. Brandon Wimbush kept the ball and took it across the goal line for a touchdown of his own. Notre Dame adding insult to injury by taking a 28-0 lead with 3:54 to go in the half.

ND would go into halftime ahead 28-0 over the Trojans before the band Chicago would take the field for a performance. 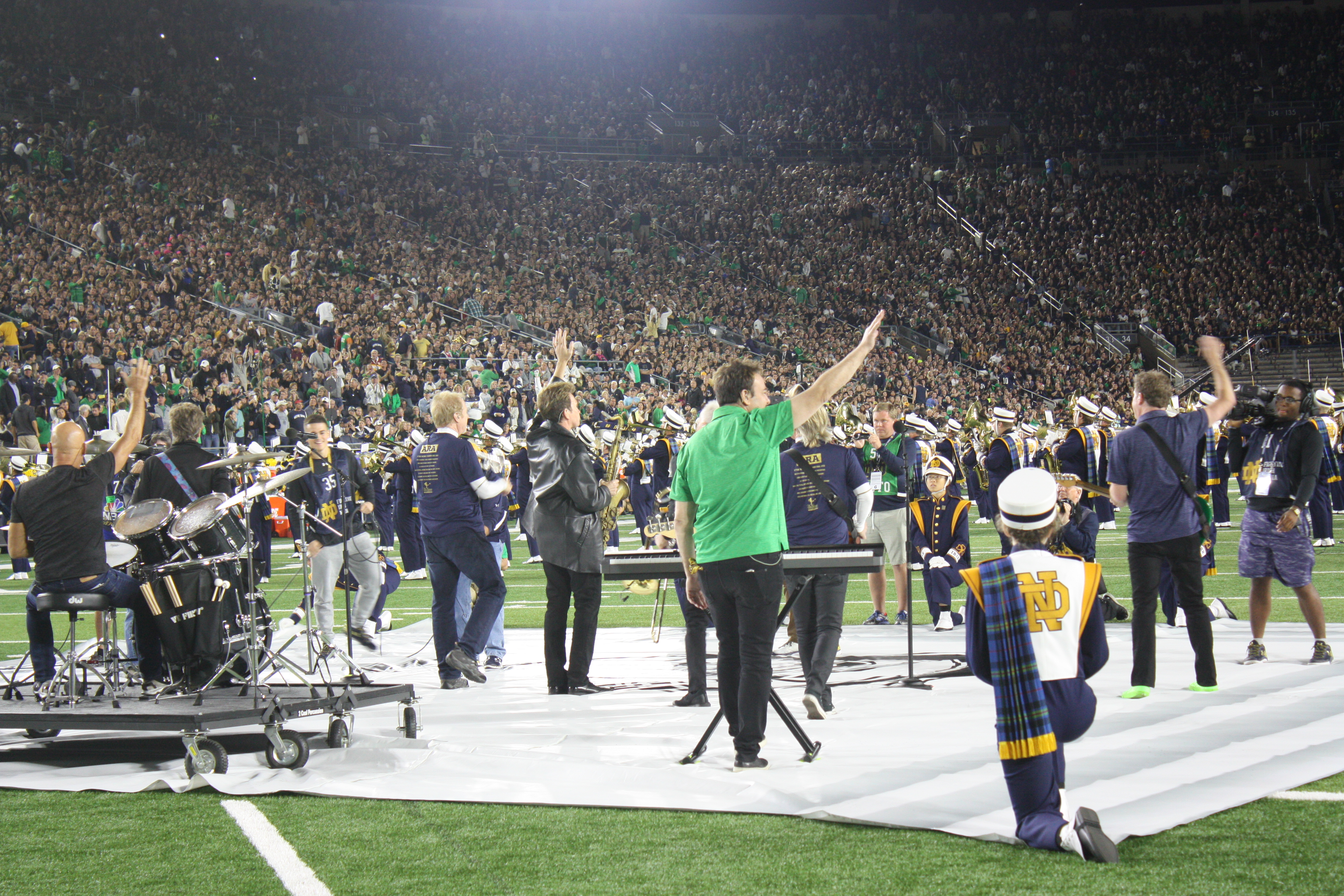 Chicago preforming with the Notre Dame Marching Band at halftime.

HALFTIME: Notre Dame leads USC 28-0. As impressive a half as we’ve seen from the Irish. #NDvsUSC

The USC Trojans would finally claim their spot on the scoreboard after struggling to find a groove in the first half. Darnold connected with Steven Mitchell Jr. in the endzone after a 12-play drive. ND would still dominate 28-7.

The Irish would answer right back to the Trojans on the next possession. Wimbush with the quarterback keeper, would take the ball seven yards to tack on another six points. Yoon's kick would be good and their lead extended to 35-7.

The third quarter served as a brief tug of war as USC's Darnold completed a 16-yard pass to his receiver in the endzone to add a touchdown to the score. The Trojans try to come back with a score of 35-14 after the kick for the extra point.

Notre Dame would not relinquish any control as on Notre Dame's following possession, it would only take one play for the ball to find the hands (and legs) of Adams who took it to the house. Adams would run 84 yards for a touchdown. ND 42, USC 14 as the teams head into the final quarter of the game.

Most points by a Notre Dame team against USC since 1977– the last time the #Irish won a Nat’l Title. Funny- that team honored tonight.

The Fighting Irish's trend of dominance would continue into the first possession of the fourth quarter. After a short, 4-play drive, Adams would take the ball into the endzone for his third touchdown of the night. The Irish pull even further away, 49-14 with 13:17 to go in the game.

The Trojans just wouldn't have enough power to overcome Notre Dame. The Irish win 49-14 and improve their record to 6-1 on the season.