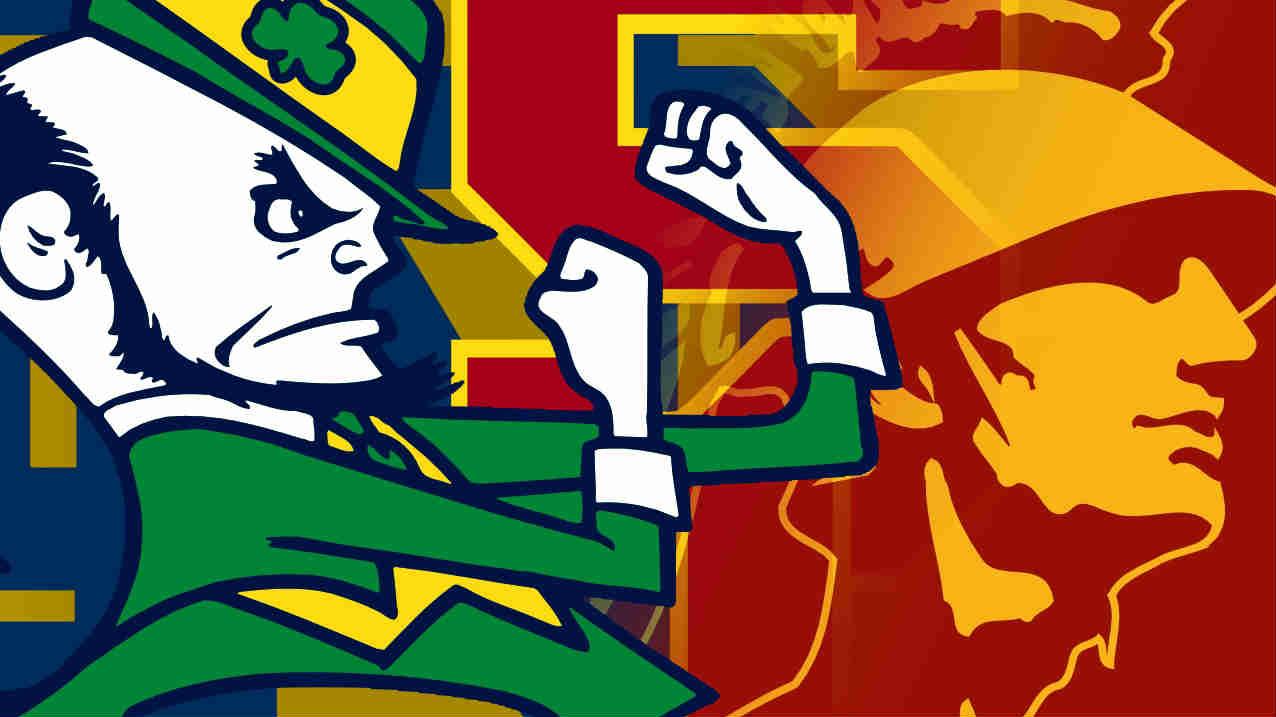 On Saturday, November 29, the Notre Dame Fighting Irish traveled to the Los Angeles Memorial Coliseum to close out the regular season against their rival, the University of Southern California Trojans.

The Fighting Irish went into the game hoping to salvage what has become a complete turn around in the second half of the season, but the struggles continued through this game.

The game started off seeming as if it was going to be a defensive struggle, with the first three drives resulting in punts. However, USC's second drive of the game would set the tone for the rest of the day for the Irish.

USC began their second drive at their own 20 yard line. It took the Trojans just five plays to quickly drive 80 yards, capping their drive off with a huge 48 yard touchdown pass from quarterback Cody Kessler to George Farmer. The score put the Trojans on the board first, now leading 7-0.

After another punt, USC's offense would begin their drive in good field position at their own 49 yard line.  After a few running plays and a pass interference penalty against the Irish, Kessler again struck through the air. His 16 yard pass to Adoree' Jackson would go for the Trojans' second score of the game, putting them ahead 14-0.

Again the Irish were forced to punt, and again set them up in good field position, this time at their own 45 yard line. On just the fifth play of the drive, Kessler was able to hook up with Farmer on another big pass play. This pass went for 31 yards and yet another touchdown for the Trojan offense. Kessler seemed to be on fire, putting USC up on the Fighting Irish 21-0 in the first quarter.

The next Notre Dame possession would not result in a punt, but their first turnover of the game instead. On the eighth play of the drive, Everett Golson's pass was intercepted by Gerald Bowman and returned 24 yards to the USC 49 yard line, giving the Trojans great starting field position once again.

It took USC's impressive offense only six plays to drive 51 yards and in for the score. This touchdown came on a six yard pass to Darreus Rogers, putting the Trojans up 28-0.

The next ND drive resulted in another Irish turnover. After driving 25 yards in five plays, Everett Golson lost the ball for the Irish again, this time fumbling it. Golson was hit from behind as he stepped up into the pocket, forcing the ball out of his hands, allowing the Trojans to easily recover it at their own 49 yard line.

USC's offense showed no signs of slowing, pounding out another nice scoring drive. Cody Kessler again went into the endzone through the air against the Irish, connecting with Nelson Agholor from 14 yards out for the touchdown. USC seemed to be pulling away for good, now up 35-0 on Notre Dame.

With the offense not showing any signs of life, Notre Dame Head Coach Brian Kelly decided to switch things up and replace Everett Golson with Malik Zaire at the quarterback position. Zaire looked very comfortable with his first drive, leading the Fighting Irish on a 64 drive in only three plays. This drive, mostly moved along by a 49 yard pass to Chris Brown, was capped off by an 11 yard Malik Zaire keeper for the touchdown. The Irish stopped the bleeding, now down 35-7.

After forcing the Trojans to punt for just the second time in this game, the Fighting Irish offense went on another nice drive led by Zaire. After driving 54 yards in 10 plays, the Irish were stopped short and forced to attempt a field goal. Kyle Brindza's 44 yard attempt hit the left upright and bounced out, leaving the Irish down 35-7 to end the first half.

While the first half was full of quick scoring drives, the second half proved to be just the opposite.

The Trojans' first drive of the second half was yet another scoring drive for Notre Dame's rivals. After 11 plays and 75 yards, Cody Kessler's throwing arm put another dagger in Notre Dame's hopes as he connected with Randall Telfer on a nine yard touchdown pass.  The score put USC up 42-7.

After an Irish punt, USC went on what would be their final scoring drive, and their first rushing score, of the game. On the eleventh play of a 70 yard drive Justin Davis scampered into the endzone from 16 yards out to give the Trojans a 49-7 lead.

The very next Notre Dame drive, still in the third quarter, ended up being the final scoring drive of the game. After setting up a First and Goal on the one yard line, Greg Bryant pounded the ball in for the Fighting Irish, making the score 49-14 USC.

After both teams turned the ball over on downs, due to failed fourth down conversions, USC played clock management, ending the game with a 49-14 victory over the Fighting Irish.

Cody Kessler became the first player ever to throw for five touchdowns in a single half and six in a single game against Notre Dame.

With this loss, the Fighting Irish fall to 7-5 on the season and now wait to find out who, where,  and when they will be playing for this year's bowl game.
Share this article: