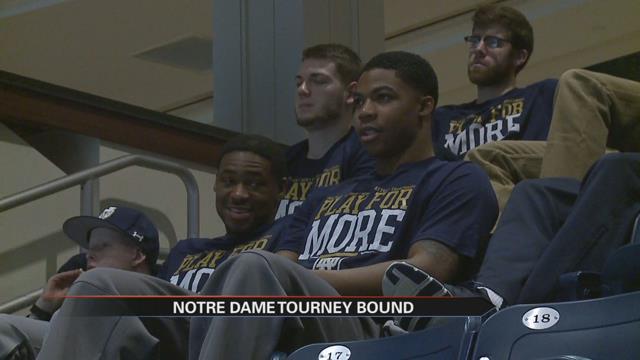 Notre Dame is headed to the NCAA  Tournament as a 6th seed in the East Region.

They will face off against the winner of the Michigan/ Tulsa game on Friday in Brooklyn.

The team gathered at the Purcell Pavilion to watch the Selection Show together on Sunday.

Coach Mike Brey says he was relieved to hear the team was chosen.

This will be the teams 12th appearance in the tournament under Coach Brey.

“Our team can celebrate this day,” said Coach Brey.

The team will compete in New York on Friday. As a native of Troy, NY, forward Elijah Burns is excited to play just a few hours from home.

“It’s going to be pretty cool. Being able to be back home and be near family and friends is always amazing,” said Burns.

This will be the 35th appearance in school history for the men's basketball team.

But, Coach Brey says although they’ve been to the dance before this one is bringing up new challenges.

“It is a little unusual that you don’t really know your opponent yet,” said Coach Brey

While Coach Brey says scouting both teams will be part of their strategy, he plans to focus on his team.

“I will not be as distracted with the opponent, I’ll be more concentrated on my team and that’s probably a good thing for this team right now,” said Coach Brey.

“These next couple days of practice we can really focus on our self because we don’t know who we’re playing yet so we can really emphasize the things we have to do as a group so that we ca n be playing our best basketball,” said guard Demetrius Jackson.

Michigan and Tulsa will play Tuesday and on Friday Notre Dame will play the winner.