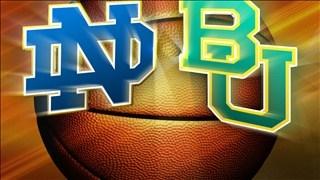 The Notre Dame Women's Basketball team took to the hardwood Sunday night against the Baylor Lady Bears in an Elite Eight match-up in the NCAA tournament.

The game was tight the whole way through, with Baylor taking an early lead at 26-17.

The Fighting Irish stormed back, tying it up and eventually taking a 39-37 lead at halftime.

The game remained close throughout the second half, but Notre Dame was able to pull away in the final minutes and come away with a 77-68 win.

This win is Notre Dame's 21st straight victory and now the women's team moves on to their fifth consecutive Final Four appearance.

The Fighting Irish will face South Carolina in Tampa Bay on Sunday.