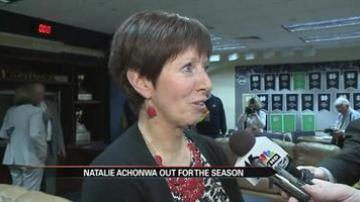 NOTRE DAME, Ind.-- Notre Dame is Nashville-bound for its fourth consecutive trip to the Final Four this weekend, the sixth time in program history.

“We’re headed to Nashville, this is what we’ve strived for this whole season to go to the Final Four, so it’s just excitement,” Irish guard Lindsay Allen said.

Along with the excitement, the team also faces some uncertainty. How will the number two ranked Irish women's basketball team perform without one of their star players? As the stakes get higher, so does the pressure.

This weekend the Irish will look to the bench to replace Natalie Achonwa's power on the court. She was forced out of action in Monday night's game with a torn ACL. But that doesn't mean she won't play a role in Nashville.

"You saw her emotion when she got up to leave the floor. She is still going to be leading this team," Head Coach Muffet McGraw said.

Pressure is nothing new for the team. The Irish are keeping their cool, as usual, and say they have plenty of talent to step up.

"You know I think we have other people to step up, but at this point we're still hoping that we have Ace back, but we have Taya, Keish, people that are ready to step up and we know that our coaches will have us ready regardless," McBride said.

"We need everyone and now is the time. We need people to step up," Irish guard Jewell Loyd said.

Notre Dame is now the sixth team to make four consecutive trips to the Final Four. They are among UConn, LSU, Stanford, Louisiana Tech and Tennessee.