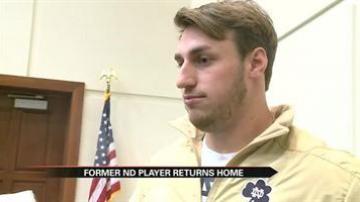 SOUTH BEND, Ind. -- Former outside linebacker Danny Spond spoke to the media Friday for the first time since announcing he would no longer play at Notre Dame because of a medical condition. He will be going to his home state of Colorado with the team this weekend.

"Any time you end something that's all you've ever known is pretty tough. This would have been my 17th year of playing football," said Spond.

A Littleton, Colorado native, Spond had been looking forward to playing in his home state in this weekend's game since his freshman year.

But this August he was forced to make one of the toughest decisions of his life. Spond announced paralyzing hemiplegic migraines would bring his football career to a grinding halt

He says telling his coaches and teammates was the hardest part.

"I told them the situation and told them what future plans were for me playing-wise, but then in the next sentence I was saying 'but don't forget about me' is what I told them," said Spond.

Spond has spent the season giving back by coaching and motivating his teammates.

"On the trip to Dallas, he spoke at the pep rally, and after the pep rally I think he had ten job offers. He's an amazing young man," said Irish Head Coach Brian Kelly.

He does it for a team, a program and a university who he says has given him so much in the last four years.

"I want to be with this team as much as I can, whatever that means. If it's speaking at pep rallies or it's coaching like I have been every day, this university has given me so much I feel like I owe it to do what I am," said Spond.

Spond he is expecting lots of family members to come out and support the team at Saturday's game.