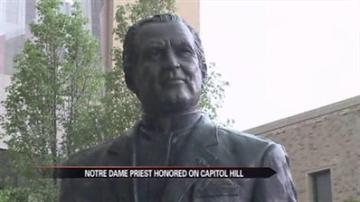 "He is the spirit of Notre Dame. Other than Father Sorin, our founder, Father Hesburgh has meant more to Notre Dame than anyone in its history,” said Dennis Brown, spokesman for Notre Dame.

For 35 years, Father Theodore Hesburgh presided over the University of Notre Dame. In that time, he shaped the school into what it is today.

"Two things that are perhaps most important in his mind as far as his contributions here are his decision in 1967 to turn governance over to a mixed board of lay and religious. And then in 1982 when me made the school coeducational,” said Brown.

But his contributions weren't just for Notre Dame.

He also worked on nuclear disarmament, relief for Cambodia, immigration reform and served as chairman of the Civil Rights Commission during the civil rights movement.

"He really is one of the most iconic and important figures in American history in the 20th century,” said Brown.

Wednesday, just 3 days before his 96th birthday and on the 70th anniversary of his ordination, the United States government honored Father Hesburgh's contributions.

"Speaker of the House Boehner and House Minority Leader Nancy Pelosi got together, which in and of itself is remarkable, and decided they wanted to honor Father Hesburgh. Both are Catholics and aware of his contributions both to this country and globally,” said Brown.

The event was held at the US Capitol and all of Congress was invited to attend.