Notre Dame's Te'o is defensive player of the week 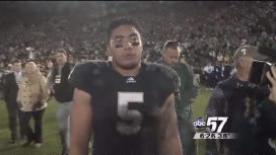 On Monday, the senior linebacker was named the Football Bowl Subdivision's defensive player of the week.

Te'o had an exceptionally outstanding game against Navy on Saturday. He collected his first career interception and first career fumble recovery. Not to mention, the numerous solo tackles against Navy's notorious triple option offense.

But, the highest praise for Te'o came from Irish head coach Brian Kelly, who likened Te'o to the legendary Ray Lewis.

“A lot of people talk about Ray Lewis being demanding about the defensive core and the linebacker core for the Baltimore Ravens," said Kelly. "Manti’s taken on that kind of role and he’s demanding and making sure his players play at a high level and it’s exciting to watch.”

Notre Dame will play BYU this season on October 20.