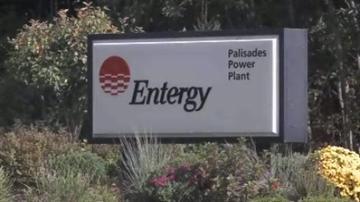 During a recent inspection by the Nuclear Regulatory Commission, inspectors found flaws in nearly a third of the housings of the control rod drive mechanisms at the Palisades Nuclear Plant. The housings prevent radioactive fluid from leaking.

The flaws were found during a planned inspection on Wednesday.

The plant was shut down at the time of the inspection for a planned refueling.

The Nuclear Regulatory Commission's spokeswoman Viktoria Mitlyng says public is safe. The flaws weren't visible to the naked eye, but there is no evidence of any leakage.

"Do we want to find flaws? No. But if they do exist, we want to be able to find them early and fix the situation," said Mitlyng.

The flaws were found in 17 of 45 compartments that hold radioactive fuel rods and prevent reactor coolant from leaking.

Mitlyng says the inspection was part of an agreement initiated in May of last year after 79 gallons of radioactive water leaked into Lake Michigan.

"It was a commitment as a result of the crack that they had," said Mitlyng.

The issues found this time around include tiny indentations and cracks too small to be seen by the naked eye.

They found them while the plant was already offline earlier this month for maintenance and refueling.

"That equipment is not the same as when the plant went into operation. So, components are constantly being replaced," said Mitlyng.

When pressed about safety at the Palisades plant, Mitlyng said they have two inspectors on site year-round. One is currently overseeing the fixing of the flaws.

"Our job is ensuring safety. We take it very seriously and you know we want the public to know that," said Mitlyng.

Palisades won't be able to go online again until the flaws are fixed.

We contacted Entergy to find out when that might happen but they refused to give a time estimate.