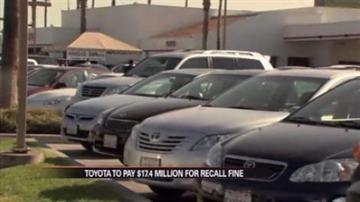 Automaker Toyota must pay $17.4 million in fines for a 2012 Lexus investigation.

The National Transportation Safety Board said Toyota did not report a safety defect in its Lexus R-X 350 crossover in a timely manner.

Officials said the floor mats could have trapped the gas pedal.

It is just the latest in a series of problems for the car company.

Toyota has recalled more than 10 million vehicles worldwide this year.