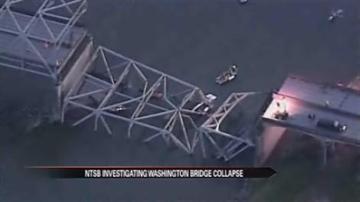 On Thursday night, a truck hit a girder that led to the collapse of a 160-foot section into the water.

NTSB chairwoman says the bridge had a clearance of 14 and a half feet.  The tractor trailer’s height was 15 feet, 9 inches.

"There is no signage leading up to or on the bridge describing the bridge's vertical clearance," said Deborah Hersman.

Three people were injured in the collapse. There were no fatalities.

Officials will be working the next few days to demolish and remove the damaged portion of the bridge.