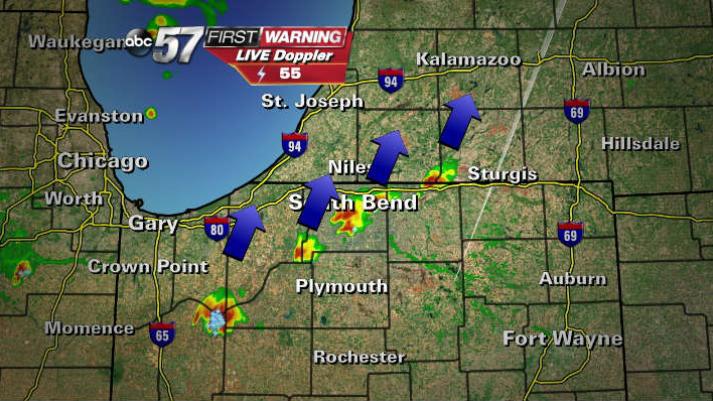 Just after 4:30PM EDT Thursday afternoon, four storms popped up on the radar: one just southwest of Sturgis, another just south of downtown South Bend, another by La Paz, and a stronger thunderstorm in western Starke County.  These were all ahead of a line of severe thunderstorms that were at least 200 miles to the west.  The ingredients were there for severe weather to form.  We had temperatures reaching into the mid 80s.  The sun was peeking through a partly cloudy sky into the early afternoon hours.

With all of these factors coming together as storms started to pop-up on the radar, they intensified very quickly.  Almost immediately, three separate severe thunderstorm warnings were issued with a threat of 60 mph winds and damaging hail.  Heavy downpours and frequent lightning were also added the list of concerns, especially in the cell that formed over South Bend and moved east-northeast towards Elkhart, where a street was flooded with at least 6"-8" of water. Plus, Bremen Highway just north of Petro Drive started to buckle.  These severe storms lasted through 6:30PM and not only left behind flooded streets, trees and power lines were brought down by gusty winds, between a quarter-sized to golf ball sized hail were reported, and even a roof to a shed was blown off and landed on a car in a parking lot in Niles.  Many were without power in Berrien County, MI and St. Joseph County, Indiana even into the evening hours as crews worked to restore the power.

The severe threat has been lowered tonight, but showers and thunderstorms return for Friday, placing Michiana in the slight risk category again for severe thunderstorms.  Stick with ABC57 News for the latest timing and updates online and on the air.