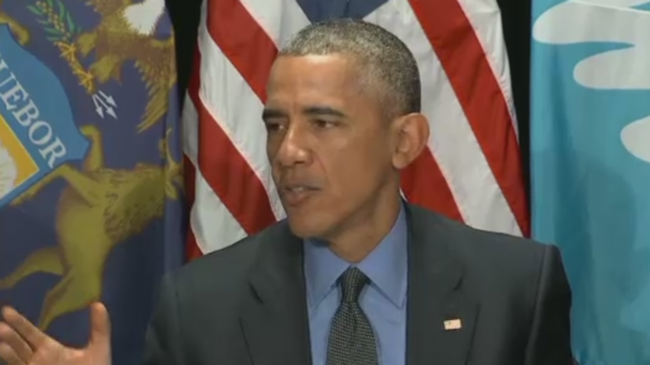 After a briefing from officials on response efforts to the lead poisoning, Obama took a sip from a glass of filtered Flint water, insisting that residents should feel safe doing the same. His message to Flint's residents: don't panic.

"We can't just sit back and feel panicked and feel scared. Those emotions are understandable," he said. "But if we want to make sure that our kids are properly taken care of, then we've got to be proactive and get out ahead of this thing."

"We've got an entire couple of generations of Americans that have done really well despite the fact they may have had something that is not optimal," Obama said, suggesting that he himself was likely exposed to lead paint as a child.

Aside from the briefing, Obama met for a neighborhood roundtable with families affected by the lead poisoning, which came to light last year. He also met with Gov. Rick Snyder, a Republican who has withstood calls to resign over the water disaster.

When Snyder appeared on stage before Obama's remarks began, he was loudly jeered by the 1,000-person crowd.

"Let me begin by saying I understand why you are angry and frustrated. I want to come here today to apologize," Snyder told the crowd, who loudly rejected his message. Later, when he declared that "government failed you," a person in the crowd loudly responded, "You failed us."

Obama has said he would be "beside myself" if he was a parent in Flint discovering lead-tainted water, though he hasn't weighed in explicitly on Snyder's handling of the crisis. Democratic 2016 hopefuls Hillary Clinton and Bernie Sanders have called on him to resign.

The visit comes amid multiple investigations into how poisoned water was allowed to flow into Flint's homes for months before either the state or federal government raised any alarm. The water contamination came after the city switched its supply from the Detroit system to the Flint River to save money. The river water wasn't treated properly, and lead from old pipes leached into the supply.

Democratic presidential candidates have seized on the issue, traveling to the city to spotlight the city's predicament. CNN sponsored a March 3 primary debate between Hillary Clinton and Sen. Bernie Sanders in Flint, which was already weathering an economic downturn when the contaminated water arrived.

Obama said last week he wanted to "shine a spotlight on the fact that Flint, although extreme, is not unique."

"We have underinvested in some of our basic infrastructure that we rely on for our public health," Obama said. "Hopefully, it will give me a chance to speak to the nation as a whole about how we need to ensure that our air is clear, our water is clean, and that our kids are safe."

Aside from accusations of wrongdoing against state officials, a group of Flint residents filed an administrative complaint against Obama's Environmental Protection Agency last week, alleging negligence in the federal response to the crisis. The complaint cites memos showing the agency was aware of the lead poisoning months before residents were notified.

The White House and the EPA have said that rules restricted how much the federal government could share directly with Flint's residents, but have conceded the situation could have been handled better.

When he visited Wednesday, Obama pressed Congress for more emergency funding for the city. A recent attempt to provide federal resources died on Capitol Hill when it was included in a broader energy package. But a recently introduced water infrastructure package includes $100 million to repair Flint's water system, along with $50 million for health care needs.

Obama did, however, meet with 8-year-old Amariyanna "Mari" Copeny, who has pressed lawmakers to scale up their response to her city's water problems. Responding to a letter she wrote him, Obama told Copeny he wanted to "make sure people like you and your family are receiving the help you need and deserve."

Copeny told CNN last week the water in her city had not improved.

"It has lead in the water and it gives you really bad headaches as well and you smell like bleach and fish," she said.