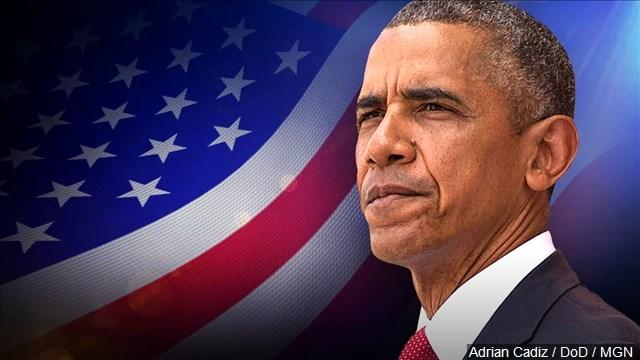 (CNN) -- President Barack Obama condemned Donald Trump's sexually aggressive and lewd comments caught on tape a decade ago calling them "disturbing" and remarking that he wouldn't repeat the language as there were children in the room.

"One of the most disturbing things about this election is just the unbelievable rhetoric coming at the top of the Republican ticket," Obama said at a campaign event in Chicago for Democratic Rep. Tammy Duckworth, who is running for the Senate. "I don't need to repeat it. There are children in the room."

Obama -- while appearing perturbed by the comments -- said that Trump's "demeaning" and "degrading" statements were not limited to women but at minorities, immigrants, the disabled and veterans.

"It tells you that he's insecure enough that he pumps himself up by putting other people down. Not a character trait that I would advise for somebody in the Oval Office," Obama told the audience, adding Trump "doesn't care much about the basic values that we try to impart to our kids."

Obama's comments come just hours before Trump will face off against Democratic presidential nominee Hillary Clinton, in the second presidential debate. Trump released a defiant apology for comments that came to light Friday in a Washington Post story.

The President also focused his remarks on Democrats winning the Senate, stumping for Duckworth -- an Iraq War Veteran --who is up for the seat Obama once held as a senator.

"Are we really going to risk giving Donald Trump the majority he needs to roll back all the progress we've made over the last eight years?" he asked.

Obama spent much of the weekend focusing on the election in his home state of Illinois. On Friday, the President cast an early vote in Chicago and fundraised for Clinton and other Democrats.

"In case you hadn't noticed, the stakes in this election are extraordinary," Obama said at a Democratic fundraiser Friday. "I'm confident that we will have an incredibly capable successor in the White House, by the name of Hillary Rodham Clinton. When I say I'm confident, I'm not over confident. We've still got a lot of work to do."