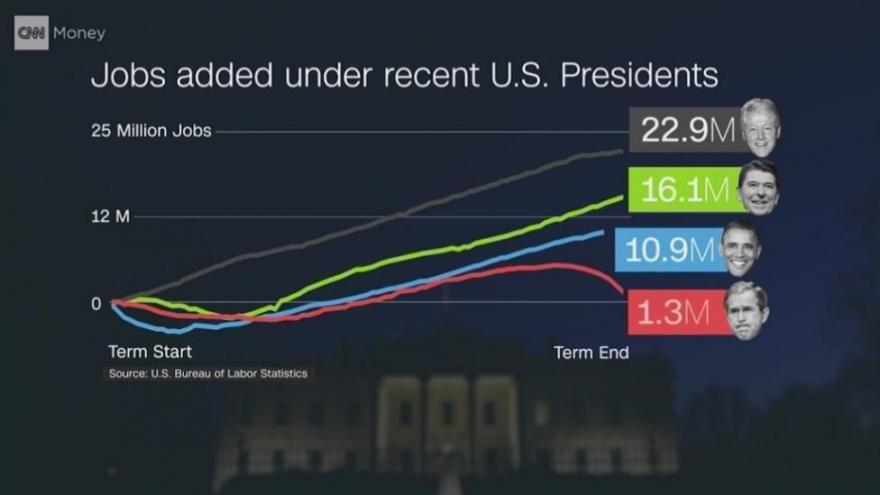 NEW YORK (CNNMoney) -- The Obama economy closed out with a low 4.7% unemployment rate.

In December, his final full month in office, the U.S. economy added a slightly disappointing 156,000 jobs. It marked the 75th consecutive month of job gains, the best on record. For all of 2016, the U.S. added over 2 million new jobs.

"Today was a positive close to the eight years of the Obama administration," says Andrew Chamberlain, chief economist at career website Glassdoor.

Wages grew a solid 2.9% in December, the best pace since 2009. Wage growth has been one of the last measures to gain momentum during Obama's tenure. Job gains in November revised up significantly, adding 19,000 more jobs than first reported.

America's job market has made progress under Obama's watch. U.S. unemployment hit a high of 10% in October 2009 and is now at less than half that level. In December, the unemployment rate rose just a tad to 4.7% from 4.6% in November, the lowest rate since 2007.

The underemployment rate, which includes part-time workers who would like to work full time, also fell to 9.2%, its lowest point since 2008.

"By just about any measure, 2016 was a banner year for the job market," says Ian Siegel, co-founder of ZipRecruiter, a job recruitment site.

In total, the economy has added 11.3 million jobs during Obama's presidency.

Experts and pundits often debate how much credit a president deserves for job growth. Some believe the Federal Reserve helped buoy the job market by keeping borrowing costs low in order to revive the housing market. Others criticize the Fed's decisions.

In any case, the American economy still has problems. Growth remains sluggish. The U.S. central bank expects growth to be a mere 2.1% this year.

Over 5 million Americans have part-time jobs but want to work full time. And many blue collar workers feel left behind in the economic recovery from the Great Recession -- a major factory that played into President-elect Donald Trump's election victory.

One major challenge Trump will face is that many manufacturing workers who lost jobs don't have the advanced skills required for the new jobs.

"Those without higher skills and advanced training are out on the struggling end," says Fred Goff, founder of Jobcase, a job-search site.

Other industries also may pose a challenge, for other reasons. Health care led the job gains in December, adding 43,000 new jobs last month. America also added 20,000 social assistance workers, many of whom care for elderly Americans. Trump has promised to repeal the Affordable Care Act, which some industry experts say could cost jobs.

Despite an uneven recovery, the U.S. job market kept up its overall momentum right up until the end of the year.

"The economy hit some headwinds and it continued to move forward," in 2016, says Robert Murphy, an economics professor at Boston College and former White House economist during the Clinton administration.