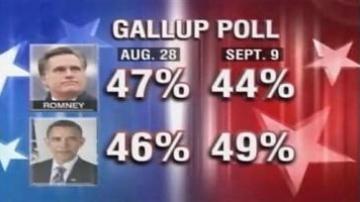 The election is just two months away things are starting to take shape on the campaign trail.

Mitt Romney campaigned in the battleground state of Ohio and President Obama is taking a break after a three day campaign blitz.

The latest Gallup Daily Tracking Poll has President Obama up five points, showing his post-convention bounce that continued to through the weekend.

The bump comes after a dismal jobs report on Friday.

But the Obama Campaign admitted on Monday that it will be a tight race.

"We have always believed that this will be a very close race. And that continues to be the president's belief, as well as the belief of those around him," White House Press Secretary Jay Carney said during Monday's press briefing.

Last month, the Obama Campaign and Democrats hauled in more than $114 million campaign donations, making it the best fund-raising month of the election cycle.

That's also more than Mitt Romney and Republicans for the first time in three months.

Romney and the Republicans pulled in $111 million in August.