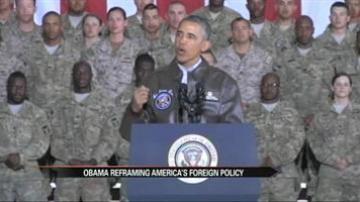 President Obama's recent surprise trip overseas to Afghanistan over the weekend shed some light on how he's shaping his foreign policy after the United States troop withdraw later this year.

On Sunday, the President spoke with the troops serving overseas and outlined his plans for keeping some American troops there even after the 20-14 draw down deadline.

The Pentagon has been pushing for at least 10,000 troops stationed there post 2014.

The president is expected to fill in the details for his foreign policy plan in regards to Afghanistan later this week.