Obama to make his case for re-election 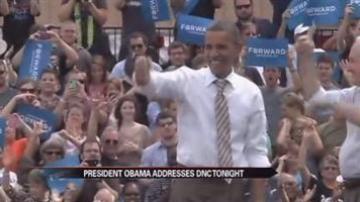 It is the final night of the DNC in Charlotte and the anticipation is building.

Obama's chief campaign strategist says Obama will lay out his economic vision for the next four years.

"I think folks after watching this speech will have a very clear sense if where he thinks the country needs to go economically. The path we need to take," David Pluffe said.

Weather concerns forced the president to move tonight's speech inside to a much small venue.

He had a a conference call with frustrated ticket holders.

The Obama campaign says the president will make time to see them before the election.