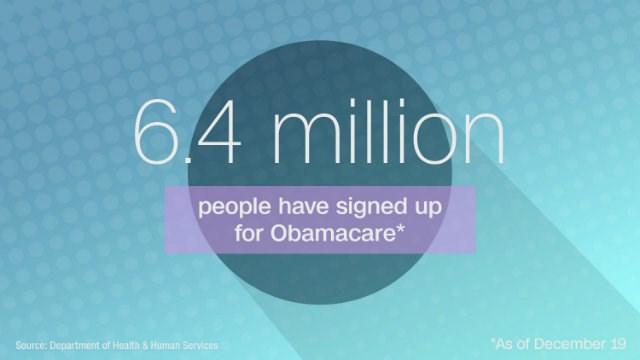 NEW YORK (CNNMoney) -- Although President-elect Donald Trump has vowed to repeal Obamacare next month, a record number of people have signed up for coverage for 2017.

The number of people opting for Obamacare is under more scrutiny than usual this year, since Congressional Republicans have pledged to dismantle it soon after Trump takes office on Jan. 20.

Even before the election, there were concerns that customers would be deterred by price hikes -- the average premium for the benchmark silver plan soared 22% for 2017 -- and the fact that some insurers pulled out of the exchanges.

However, administration officials sought to portray Obamacare as strong and crucial. Even if Trump and Republican lawmakers repeal the health reform law, they are likely to keep it in place for at least two to three years while they formulate an alternative.

"Today's enrollment numbers confirm that some of the doomsday predictions about the marketplace are not bearing out," said Health Secretary Sylvia Burwell. "American people don't want to go backwards. They don't want to gamble with their healthcare during a repeal and delay."

The pace of enrollments picked up closer to the deadline for coverage starting January 1, which was extended four days to Dec. 19 to accommodate demand. President Obama called attention to the fact that a record 670,000 people selected policies last Thursday.

One worrisome sign is that fewer new consumers rushed to the exchanges than a year ago, when 2.4 million of the roughly 6 million people signing up for Jan. 1 coverage were first-timers. This year, only 2.1 million of nearly 6.4 million are new to Obamacare.

Burwell said the administration plans to ramp up its advertising and outreach efforts to potential new enrollees in January, noting that new consumers tend to sign up later in the enrollment period, which remains open until Jan. 31.

Current participants will be automatically re-enrolled in their plans on Jan. 1 unless they opt to switch policies. Consumers aren't officially enrolled until they pay their first month's premium.

States that run their own exchanges are also seeing a boost in interest. Minnesota has enrolled a record 54,600 people, state officials said Monday. That's more than twice as many as last year.

In Connecticut, meanwhile, just over 24,200 residents had enrolled as of last Thursday.

The Obama administration expects a total of 13.8 million people to sign up for plans by the end of the enrollment period, which began Nov. 1.

However, it's common for people to drop their policies during the course of the year because they find coverage elsewhere, either through a job or a spouse. So, an average of 11.4 million people are expected to be in Obamacare policies during 2017.

Some 10.4 million people were enrolled as of June, the most recent figures available.

The Obama administration is encouraging people to sign up to show Trump and Congressional Republicans how important Obamacare is to Americans.

Still, lawmakers are expected to repeal certain parts of Obamacare -- including the federal subsidies, Medicaid expansion and the requirement that nearly all Americans obtain coverage. But they will likely delay actually ending these provisions for two to three years while they come up with a replacement plan.

While insurers are locked into providing coverage next year, the delay may prompt some to rethink their involvement in 2018.

As Trump's inauguration draws closer, several think tanks issued reports highlighting the benefits of Obamacare and the dangers of repeal.

Obamacare has made it easier for Americans to access health care when necessary. The share of adults who said they had to skip going to the doctor because of costs dropped by nearly 19% between 2013 and 2015, according to a new Commonwealth Fund report.

Also, the Urban Institute issued a report Wednesday that found 4.4 million children could lose their coverage if Congress repeals but doesn't replace Obamacare. Some 88% of these children would be in families with working parents, and 54% would be white.

The number of uninsured parents would rise by 7.6 million, with nearly 86% of them in families with at least one person working part time or full time.

A total of nearly 30 million people would become uninsured if lawmakers repeal but don't replace Obamacare, according to Urban Institute. The repeal would do away with not only the individual exchanges, but also other provisions such as Medicaid expansion and letting children stay on their parents' health plan until age 26.