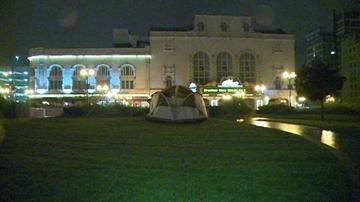 SOUTH BEND, Ind. – Set up camp; it’s what protestors with the Occupy South Bend movement have done in the Jon Hunt Memorial Plaza, in front of the Morris Performing Arts Center.

Just after 8:00 p.m. Thursday night, Jonathan Deak staked his tent down in the pouring rain. He says, he couldn’t set up his tent in front of the Wells Fargo building on Jefferson Boulevard so he moved in front of the Morris Theater.

Deak says, the group had been trying to get permission to gather in the park by working with the Morris. “The paperwork has been going slow and the rain is already here, and I mean I can’t wait on this paperwork, I got to stay dry or I’m going to get sick,” said Deak.

He isn’t the only one looking for a place to hunker down each night, and the park may soon be a temporary camping ground. “We want to be in this for the long haul, so in order for that to happen we have to have a city to live out of, so we’re going to set up shop right here and have our own little tent city,” said Deak.

The need for a temporary city seems a bit absurd to some, especially since most local protestors have warm, dry homes waiting for them. Some wonder if it wouldn’t simply be easier to go home each night and return every morning to resume their protest.

Should out-of-town supporters of the Occupy South Bend movement show up, couldn’t local protestors welcome them into their own homes as well? Before that question could be posed to Deak, the rain picked up and cut our interview short; it forced us to retreat out of the downpour and Deak into his tent.

Despite not having expressed permission to be in the park setting up tents, a second tent was up by 11:00 p.m. and several more protestors had migrated north a few blocks from the bank to the park.

He did not comment on how long they will be allowed to maintain their camp there, or if a “tent city” will be permitted.