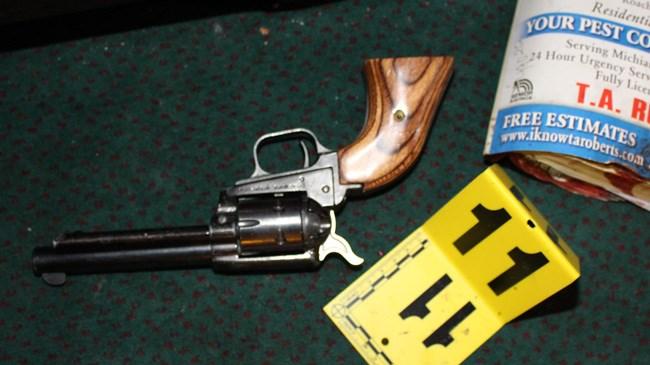 The Berrien County Prosecutor's Office says the officers who shot and killed kidnapping suspect Marcus Meridy at the American Inn in November 2015 acted in self-defense.

According to Prosecutor Michael Sepic, his office reviewed the Michigan State Police investigative reports, lab analysis reports and autopsy reports and determined no charges would be filed.

On November 18, 2015, 44-year-old Marcus Meridy went to The Willows around 7 a.m. and kidnapped his estranged wife, 38-year-old Kenyatta Wright, at gunpoint from her workplace, according to investigators.

Police say Meridy drove to a nearby medical office, changed vehicles, then drove Write to the American Inn where he restrained Wright.

Michigan State Police and the Berrien County Sheriff's Office located Meridy's vehicle in the parking lot of the American Inn and made contact with him around 9 a.m.

Michigan State Police called in their Emergency Support team, including a hostage negotiator.

The negotiator spoke with Meridy via cell phone. He allegedly said he was going to commit suicide, but refused to release Wright.

The negotiator also spoke with Wright and learned she was injured and restrained.

After approximately 30 minutes on the phone, a gunshot was heard in the room and the ES team entered into the room.

When the ES team entered the room, they heard a gunshot and saw Meridy on the far side of the bed with a gun in his hand.

Wright was located in the room with a gunshot wound to her arm.

The firearms analysis determined the two troopers each fired 6 shots. Meridy was struck by 9 of the 12, according to the investigation.

Investigators say the bullet wound to Wright's arm was likely from the rounds fired by the ES team when they entered the room.

The gunshot heard before the ES team entered was located in the box spring of the bed in the room, according to police.

An ES team member located a bullet in his bullet resistant vest. It is believed it was one of the two bullets fired from Meridy's Heritage .22 caliber 6-shot revolver.

The prosecutor's office reviewed all of the evidence and determined the officers acted in self-defense.

In this case, the use of force was reasonable and necessary under the circumstances and therefore their actions were in self-defense and defense of others.  Thus, there will be no charges sought relating to the death of Marcus Meridy.

It should be noted that had Mr. Meridy survived, he would likely have been charged with kidnapping, unlawful imprisonment, several counts of assault with a dangerous weapon, assault with intent to murder and first degree criminal sexual conduct.  Additionally, while Mr. Meridy’s death is extremely unfortunate, the skilled and heroic actions on the part of Michigan State Police ES team members prevented this tragedy from being significantly worse.