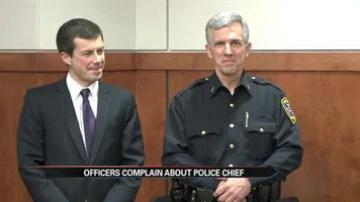 “There’s a lot of unfairness that’s going on within the department and basically it’s coming from the office of the chief,” said South Bend Police Officer Theodore Robert.

It is what he told South Bend’s Common Council three weeks ago. Robert and three other South Bend police officers accused the chief of unfair hiring practices and racial discrimination.

“What we’re seeing is that Chief Teachman is not allowing a fair process to promotion. Meaning he is creating positions, not only that, when he creates these positions he is not putting them out for competitive bid for all officers throughout the police department, as well as minority police departments," said Robert.

Now the officers are complaining of retaliation.

Robert said two days after speaking out about Teachman, one of the three officers has now been reprimanded by the police chief for a January traffic violation.

ABC57 reached out to Police Chief Teachman to get his side of the story, but our phone call was not returned.

We also contacted the city, who issued this statement:

“The City of South Bend supports diversity and fosters an inclusive and supportive work environment for all employees. We also take all complaints seriously and are committed to investigating allegations and taking appropriate action if it is warranted.”

It is the same statement ABC57 shared with you when we first broke the story.

The group has now issued three formal complaints to the city and they say they will continue to speak out until action is taken.

“We have to do what's right. We have to seek justice. And that's what I'm doing. We want justice. We want fairness. We want things that are done right,” Robert said.