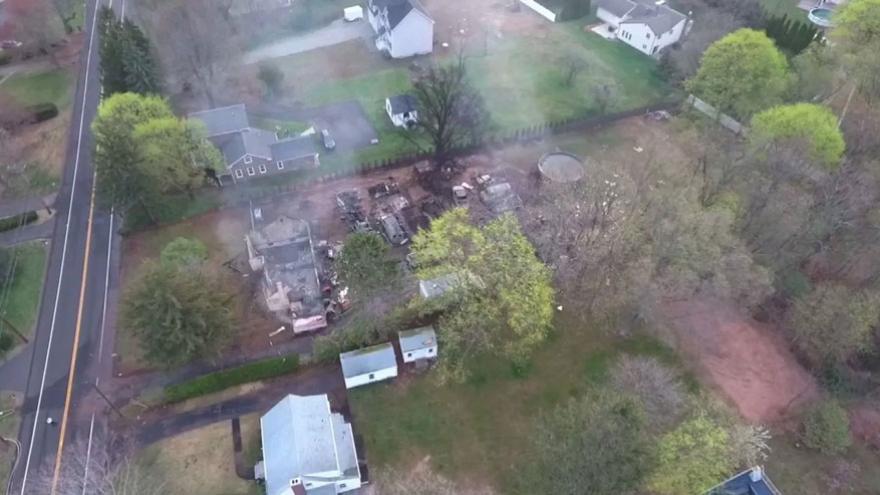 NORTH HAVEN, Conn. (AP) — A Connecticut woman's call to police to report that she had escaped after being held hostage for several days led to a standoff and explosion in a barn behind her home that left one person dead and nine police officers injured, officials said Thursday.

A regional police SWAT team responded to the property Wednesday afternoon after the woman's call and encountered a barricaded man. Officers negotiated with him for hours before a building on the property exploded around 8:30 p.m.

The nine officers were treated for non-life-threatening injuries and the remains of an unidentified person were found on the property, state police Trooper Kelly Grant said at a news conference.

Grant said she couldn't confirm the identity of the body until an autopsy was completed. The woman was not at the home when police arrived Wednesday night, but Grant declined to release her condition, saying it was part of the investigation.

The owners of the property, Deborah and John Sayre, were going through a divorce, according to court records. Deborah Sayre filed for divorce on April 18 and checked a box for a line that said the marriage had "broken down irretrievably." She did not return a phone message Thursday.

John Sayre ran a plumbing business, according to state business records. A sign on the property warned visitors there was danger and to keep out, according to a Google map street view.

The woman told authorities she was held against her will for several days, North Haven First Selectman Michael Freda said, citing what police officers told him at the scene Wednesday.

"Come out, John," police said into a bullhorn aimed at the house before the explosion.

"They all did suffer injuries that were consistent with the blast," Mulhern said. "This impacted not only the North Haven Police Department, not only our community, but this is a far reaching incident to the other communities that serve the south central region."

Firefighters on Thursday continued to put out hot spots from the blaze, which also damaged other structures and vehicles.

Residents near the home said on the police department's Facebook page that they heard the explosion and felt their own homes shake. Additional police rushed to the scene as the fire raged, and sounds of smaller explosions also were heard.

North Haven resident Joan Mazurek, 76, a retired accountant, heard what she thought was a train at her home about a mile away from the scene. It was the explosion.

"Then we heard all the, oh my God, all the ambulances and fire engines. The noise from all the emergency vehicles was unbelievable," she said. "It's a shock. Nothing ever happens like this in North Haven."

State police said they had taken over the investigation. The Bureau of Alcohol, Tobacco, Firearms and Explosives also responded to the scene.

North Haven is located just outside of New Haven, home to Yale University.