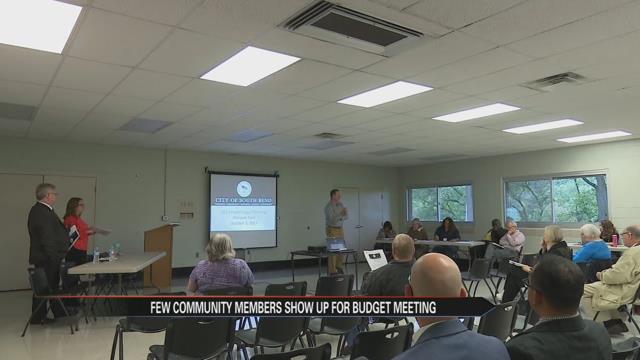 South Bend officials are seeking community feedback as they brace for another important finance season.

Monday, members of the city’s common council held a public meeting at Pinhook Park, in the hopes of including residents’ voices in the conversation about the city’s budget.

But not too many voices were heard.

Officials say this was an important hearing to learn about the state of the city finances, and yet there were probably fewer than 10 non-city employees showed up.

“We want to make sure that we are hearing what your needs are, and hold us accountable as we move forward with this budget process,” said council woman Karen White.

Many were looking for the public to weigh in on the 2017 budget.

“It was a little discouraging to say the least that this information was being handed down without any scrutiny by the public,” said resident John Hagen.

Monday’s meeting was an opportunity, and a few did speak up.

But the majority chairs were filled by city officials.

And the empty ones left many discouraged.

“I don’t know what the answer to it is,” said resident Bill Dunn. “I do believe we need to find some way to get people to understand more of what’s going on.”

Police and fire expenses will make up about 20 percent of the budget.

“The council had established priorities and those priorities reflect what we believe that we’ve heard from our citizens,” said White.

The council would like to hear more from citizens so they’re working to figure out how to make this information more accessible.

“We’ve got to go where our citizens are at, and that’s in the neighborhoods,” said White.