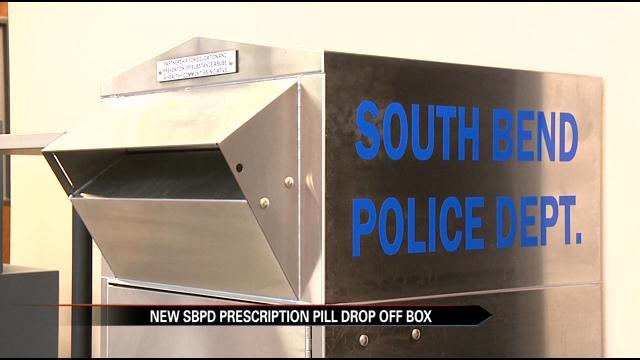 Officials are working to reduce the harm associated with items many homes in Michiana have in their bathroom cabinets! This week the South Bend Police Department installed a permanent prescription pill drop box in their lobby.

According to Attorney General Zoeller's office every 25 minutes someone in the country dies from prescription drug overdose.

Here in Indiana, a study was done in 2012 that showed drug overdoses caused 999 deaths. That's a 57% increase over the past decade.

At the beginning of January, drop off boxes were installed at the Mishawaka Police Department and the Memorial Hospital of South Bend. Both were funded by the Alcohol and Addictions Resources Center.

Captain Phil Trent of the South Bend Police Department says a recent problem that they face causes an even greater need to properly dispose of prescription pills.

“This is the gateway for kids turning onto harder drugs is actually prescription medication it wasn't like that before it is now,” says Trent.

He also explains how much the public has been using the drop off boxes.

“It's being very successfully used at the hospital. I think the hospital has had to empty it of a couple times. If you don't have prescription medication laying around your house it's not at the top of your mind but there are a lot of people who have numerous prescriptions,” says Trent.

The department says the drops boxes should only be used for pills, tablets or dry powders, not liquids or creams. They add drugs should be placed in a sealed bag or container before putting them in the drop box. An authorized narcotics officer will come by and properly dispose of the pills