Ohio man biking across the US to stop gun violence 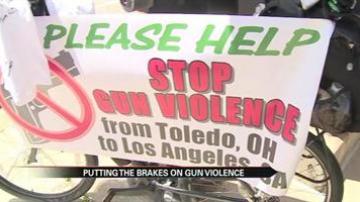 SOUTH BEND, Ind. -- An Ohio father biking across the country stopped in South Bend Friday to share his message. He is biking from Toledo to Los Angeles to encourage people to end gun violence.

"I come from a background where my mom was a prostitute, I never met my father. I've been through the institutions, the children's services," said Charles Veley.

For Veley, it's fair to say life has been an up-hill ride.

"In my hood its gang bangers I grew up a blood from Crenshaw mafia," said Veley.

Veley says that's in his past. Now he's hitting the road to try to keep kids from making the same wrong turns he made.

"The gangs, guns and drugs, they rapid all over the United States," said Veley.

Veley has been biking for two days.

Veley says his fight against gun violence is personal.

"My son, he ended up killing somebody. I'm riding for the guy that he killed. My nephew he was shot, he was tied up in a rug in a basement for 4 months. So I'm riding for him also," said Veley.

"We need to sop killing each other," said Veley.

After his brief visit in Michiana, Veley's off to the next city in hopes of inspiring others to put down the guns and stop the violence.

Once Veley gets to Los Angeles, he is going to do some work with anti gun and gang violence groups out there and then fly back to Toledo.