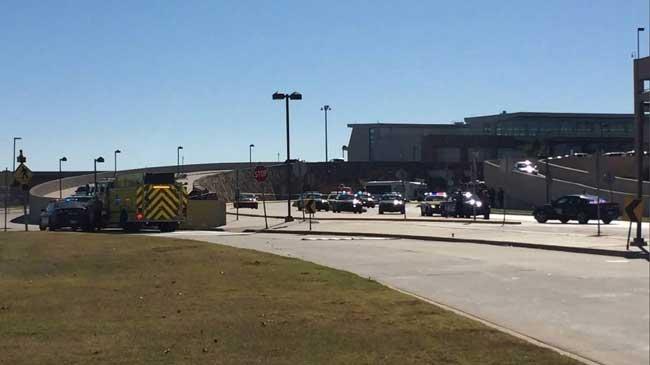 (CNN) -- A former Southwest Airlines employee used a rifle to kill a current airline employee who was leaving work at Oklahoma's Will Rogers World Airport and heading to his car, police said Wednesday.

Lloyd Dean Buie fatally shot Michael Winchester from about 50 yards, firing from the fourth level of a parking garage at his victim, said Capt. Paco Balderrama of the Oklahoma City Police Department.

Buie, 45, was found dead Tuesday in his pickup truck in the five-story garage, with a gunshot wound to his head.

Winchester, 52, was not Buie's immediate supervisor when Buie resigned 19 months ago, Balderrama said.

The motive is unclear.

"We know his intentions were to go to the airport and hurt someone. We don't know if (Winchester) was his intended target or if he meant to hurt (more people)," Balderrama said.

A news release from police said it was possible Buie was retaliating for the circumstances that led to his resignation.

The shooting prompted an hourslong manhunt that trapped many travelers in the airport terminal, on planes or in their cars. The airport was closed for most of the afternoon and evening Tuesday.

Southwest sent its condolences to the victim's family.

The airline said, "The Southwest Airlines family is deeply saddened by the passing of our Southwest family member, and we extend our heartfelt sympathies and support to his family and Southwest co-workers at this time."

The Winchester name is well-known to fans of the Sooners sports programs. Winchester and his son played football for the team. Mike Winchester was a punter in the mid-1980s and was a member of the 1985 national championship team.

His son, James Winchester, is a special teams player for the Kansas City Chiefs.

His sisters, Carolyn (basketball) and Becca (rowing), also played sports for the university.

"He was a family man, great guy, loved his family, loved his kids, grandkids, was always there for them and with them at ball games," Harryman said.

Five airlines fly out of Will Rogers to 21 destinations. The airport sees 150 commercial flights a day and more than 3.6 million passengers each year, the city's website says. At least 25 flights were canceled Tuesday, Will Rogers World Airport spokesperson Karen Carney said.

Garnie Bolling was waiting for his flight to Dallas when the airport went on lockdown. He told CNN that most people were calm. "There is that air of wanting to get going, " he said. "Most of us will miss our connections to wherever we are heading."

The airport said on its website that it operated a normal schedule Wednesday, but advised passengers to arrive 90 minutes before departing flights.

CNN's Rolando Zenteno and Amanda Jackson contributed to this report.