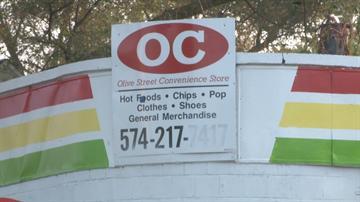 SOUTH BEND, Ind. -- Ebrahim Almalabeh, the owner of the Olive Street Convenience Store, is behind bars. South Bend Police raided the store after learning Almalabeh had been dealing prescription drugs illegally out of his store.

Aaron Durham, the owner of N.S.A Security, was recently hired by Almalabeh after a teen was shot and killed right outside the shop back in August.

Since then, Durham and his guards have worked around the clock to keep another tragedy from happening.

Durham says he could not have been more shocked by the news. Although Durham says he does not condone illegal activity, he says he still believes this store is not the cause of all the crime happening here on the west side.

Durham owns the security company that has been working to keep the neighborhood around the Olive Street Convenience Store safe, a goal Durham thought he and owner Ebrahim Almalabeh shared.

"In the amount of hours we spent there, inside the store, we never saw anything like this going on."

Recently there have been neighborhood meetings at The Church of the Holy Trinity, just across the street from the convenience store. It is a community-wide effort to stop the high levels of crime in the area. Durham believes it was those meetings that got police to act. Durham, however, says there is still more work to be done.

In the meantime, Durham says he will continue to guard the neighborhood, whether the store is open or closed, because his goal is to keep this community safe.