One confirmed case of listeria in St. Joseph County 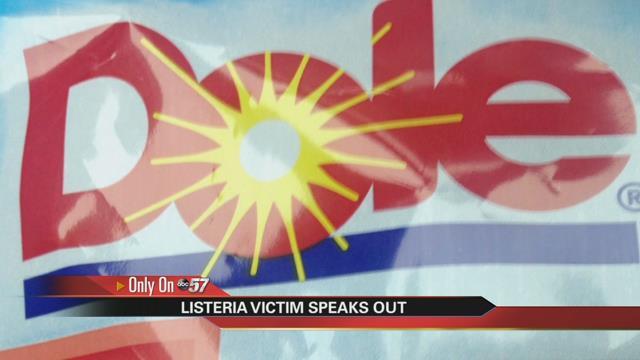 The health department confirms one case of listeria in St. Joseph County linked to the Dole recall.

One of those four people was positively diagnosed.

She says she ate a Dole spinach mix Thursday, then began experiencing stomach problems until it became unbearable.

“After probably the fifth hour of throwing up, I knew something wasn’t right,” the woman said.

She showed ABC 57 her discharge documents, diagnosing her with listeria food poisoning.

The woman says the pain was like nothing she’d felt before.

“At the top of my stomach it felt like I swallowed a softball,” the woman said.

Similar symptoms have been reported by at least three other people to health department since Monday.

“The callers all have eaten products that are named in the recall,” Carolyn Smith, food service director of the St. Joseph County Health Department said.

The recalled products were came from a Springfield, Ohio Dole branch.

Now, all salad bags coming out of that facility are recalled.

There are linked listeria cases reported in 6 states, including one death in Michigan.

“If you think you have the product, throw it out,” Smith said.

Smith and the confirmed listeria patient advise that people who have already eaten the product and feel sick see a doctor.

“If you had this salad and you feel sick. It might not be in your head. It might be something to seriously concern yourself with,” the listeria patient said.