One dead after crash on I-94 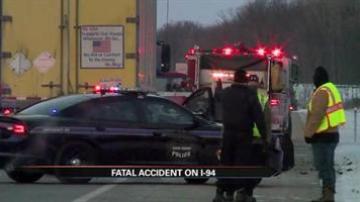 BENTON HARBOR, Mich. -- John Williams, 30, of Watervliet was killed when his car rear ended a smi on I-94 near mile marker 35 in Benton Harbor.

Traffic was backed up for hours Monday evening as crews tried to clear the scene.

Officials say traffic was already backed up from another vehicle accident.

Witnesses say one car was weaving in and out of traffic, trying to get through, but that's when police say he rear ended a semi truck.

His car smashed right underneath the rear bumper.

Williams was pronounced dead at the scene.

Officials do not believe weather played a role in the accident, and say at this time they do believe it was just a matter of reckless driving.