One dead in explosion in Union Mills, LaPorte County 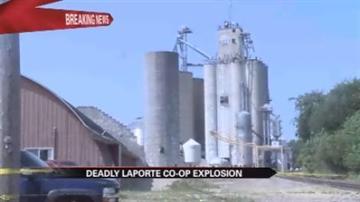 LAPORTE COUNTY, Ind. – One person is confirmed dead in what was described as an explosion at the LaPorte County Coop Union Mills in Noble Township.

The victim was identified as 67-year-old James Swank.

According to the sheriff's office the explosion was limited to a concrete grain silo adjacent to a railroad spur on the grounds of the co-op.

No hazardous chemicals were involved or released in the explosion, according to the sheriff's office.

Swank, a co-op employee, was working in the silo at the time of the explosion.

There were other injuries, but those people refused medical treatment.

“We are just shocked.  Everyone is shocked.  We are devastated,” said Swank’s niece Gina Haswah.

Sixty-six-year-old James Swank’s niece Gina Haswah held back tears as she talked about her uncle who was killed today in an explosion at this co-op.

“Kind of a muffled explosion from what I heard,” said neighbor Robert Scott.

“Upon arrival units found that the top half of the grain elevator and there was extensive damage.  Also we discovered there was one death involved in this explosion,” said La Porte Sheriff’s Chief Deputy Jim Sosinski.

2 other people were injured, but they refused medical treatment at the scene.

No hazardous materials were released from the explosion.

Now crews are working hard to try and stabilize this third stilo so it does not collapse.

Investigators were waiting all day for the building to be safe enough to enter, so they could figure out what went wrong.

The family cannot understand how this could happen.  They say Swank had retired from the steel mill and worked at the co-op to keep busy.  His niece says he still had a lot of life to live.

“He was an incredible man with so much integrity and a fantastic personality and everyone who met this man loved him,” said Haswah.