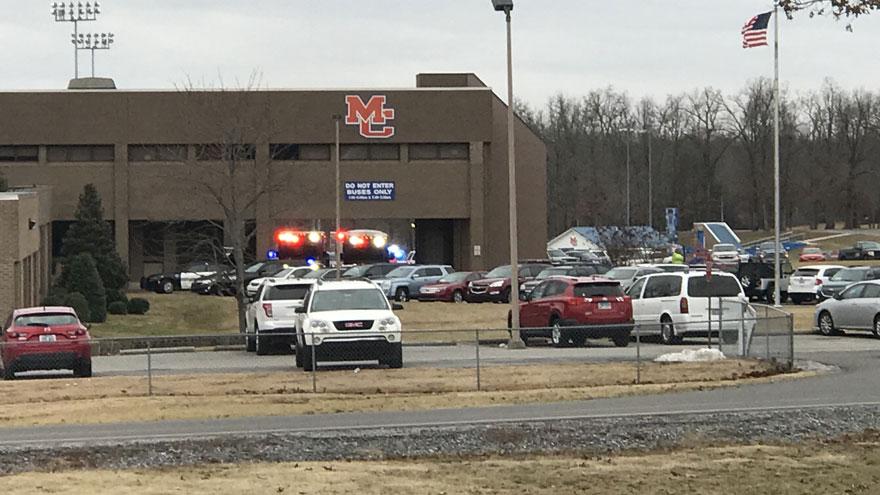 (CNN) -- Another high school has turned into a scene of carnage, this time in western Kentucky.

A 15-year-old male student was arrested at the scene and will be charged with murder and attempted murder, Bevin said.

The slain victims were a boy and a girl, both 15 years old. The girl died at the scene and the boy died at a hospital, Kentucky State Police Commissioner Richard W. Sanders said. The conditions of the injured students were not immediately known.

Sanders said the suspect, armed with a handgun, walked into the school at 8:57 a.m. ET and started shooting.

As word of the shooting spread across the Benton, Kentucky, parents panicked about the fate of their children.

Daniel Austin, a 17-year-old special needs student, was hospitalized. His parents called his cell phone incessantly until someone in the emergency room picked up and said Daniel had been shot.

His mother Andrea rushed to the hospital, bewildered as to why this happened.

"Teachers love him. Students love him. I don't think anything can say one bad thing about him," Andrea Austin said. "And that's not because I'm his mom. Everybody loves him."

Austin said her son was shot in the right arm, which might need to be amputated. She lauded the heroics of a fellow student and a teacher, who quickly scooped up Daniel after the gunfire stopped, rushed him to a car and drove him to a hospital.

The violence in Marshall County, a rural area near the western tip of Kentucky, stunned the governor. Authorities have not provided a possible motive.

"It is unbelievable that this would happen in a small, close-knit community like Marshall County," Bevin said in a statement. "This is a tremendous tragedy and speaks to the heartbreak present in our communities.

The attack in Kentucky also came day after a school shooting in Texas.

On Monday, a 15-year-old female student was shot in the city of Italy, officials said. She was taken by helicopter to a hospital in Dallas.

The suspect, a 16-year-old male, was "apprehended within minutes," city officials said.

The motive for that shooting also remains unclear.